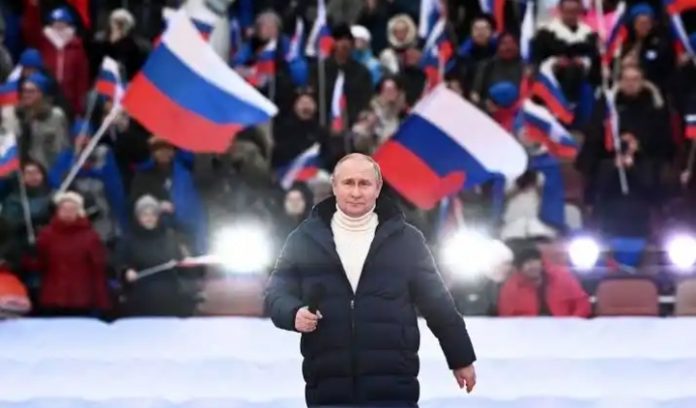 Putin’s deteriorating health is a concern to the global world, but not what his family members are really concerned about.

February 2022, questions swirled about his “wildly paranoid” behavior; others noted an “unexplained bloating of his face” and the possibility that he was taking steroids for an undisclosed medical condition.

Fast forward to April (2 months after the first event), Putin sat slightly slouched and held the edge of a small table for a full 12 minutes.To some it appeared that Putin was steadying himself against a tremor.

Just a month after the second case, there was the puffier-than-normal face; also the fact that this famously macho figure, occasionally seen bare-chested in winter, draped a blanket across his legs as he watched the procession.

And when it came time to march in the square, Putin did so with his left arm swinging; the right arm did not move.

May 23 – two weeks after the third incident, the Kremlin posted a video of Putin with Belarusian President Alexander Lukashenko, in which the Russian leader sat hunched over, his left hand and foot twitching occasionally.

First, from Proyekt, a respected Russian investigative news outlet, a series of reports have stated that Putin is regularly accompanied by specialist physicians: a pair of head and neck surgeons, an orthopedic traumatologist, and a neurosurgeon who has written about thyroid surgery and thyroid cancer. Three of these doctors, according to Proyekt, are Putin’s “most frequent travel companions.”

Why are Putin’s family members not worried about his condition and symptoms? Perhaps they share and believe in Dekleva’s assessment, he believes Putin is an aging leader suffering from chronic back pain.

“He’s almost 70. He’s not 50 anymore. So a lot of what we see is probably normal aging,” Dekleva has told Grid.

“His face is a little puffier — not uncommon. Lately he probably hasn’t worked out as much, he’s more isolated, maybe put on a little weight like everyone else did during the pandemic.”

For Dekleva, any discussion of “evidence” must include Putin’s famous passion for sport. There may be a stunt quality to some of the Russian leader’s televised appearances on horseback or the judo mat, but Putin is a decent hockey player and accomplished practitioner of martial arts.

He is known to have sustained serious back injuries; he fell off a horse during his first term, and in 2017, at age 64, Putin took a near-somersault fall on the ice in an exhibition hockey game. As Dekleva put it, “that hurts.”

“He probably has recurrent, chronic low back pain,” Dekleva said. “And so if you catch him at a time when he’s having a flare-up he’s going to be uncomfortable. I mean, he needs a standing desk!”

Just like Dekleva, perhaps his family members do not see enough to convince them that Putin has Parkinson’s disease or another neurological illness.

Putin’s family undermining his health condition is a time bomb that would go haywire and set the world ablaze.

Unauthorized use of cellphones by Russian soldiers led to Ukrainian strike that killed 89 troops, military says

Putin ‘Is Being Kept Alive On Western Cancer Drugs’