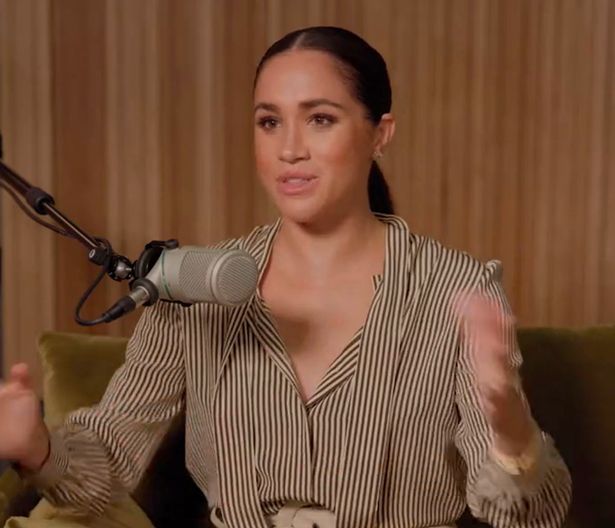 Meghan Markle claims a “very, very influential and inspiring” woman pleaded with her not to give up her activism after becoming a royal in the days before her wedding.

In the latest episode of her Spotify podcast Archetypes, she explores “the stereotypes and judgments women face in the world of activism” and chats to actresses Jameela Jamil and Shohreh Aghdashloo.

Meghan talks about the “unspoken annoyance” that swirls around women in activism and reveals that she “couldn’t quite wrap my head around it”.

And in the show, she tells of a message that was shared with her just before she married Prince Harry, where she claims she was told not to give up her activism when it came to girls and women’s rights – but doesn’t name the person who told her it.

She said: “It reminded me of a message that was shared with me just a few days before my wedding by a very, very influential and inspiring woman who for her own privacy, I won’t share who it was with you.

“But she said to me, ‘I know that your life is changing but please don’t give up your activism, don’t give up because it means so much to women and girls’.

“And I kept doing the work for women and girls because it matters, yes, but also because she encouraged me to do so.

“And the collective voice of all of us telling each other, that matters is perhaps the point.

“There’s safety in numbers but there’s also strength in numbers.”

Meanwhile, Meghan also talks about the term suffragette and hits out at how the word came about and how it is a dig at women with “big opinions”.

She says the term was invented by a UK publication that was seeking to make fun of and belittle militant suffragists.

She explained: “The suffix ette by the way, is literally used to describe a smaller form of something. So, for these women, it was used and adopted globally as a dig for women who wanted the right to vote.

“When I read this, I found it so interesting and it made me wonder why is female activism so audacious to some, why is it perceived as how dare she and why does some feel the need to make a woman with big opinions feel small?”

She also hits back at the term “woke”, which she claims is often treated as a “taboo” word.

Meghan added: “I thought a lot about words that become unnecessarily charged as it pertains to women, like feminism, for example, often treated, as taboo as the f word or the word woke.

“I know I’m saying woke, I fully realize I am spoon-feeding the clickbait, but here’s why. Because woke by definition means alert to injustice in society especially racism.

“Now what’s loaded or wrong with that? And when you layer a woman into that seemingly anodyne definition, it becomes for many almost disgusting, outrageous they would say.

“But why, what is so scary about a woman having an opinion as strongly as a man does?”