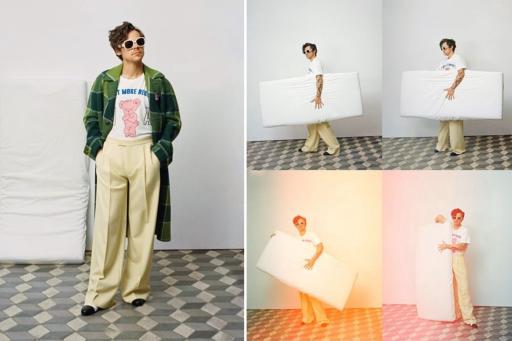 Gucci and Harry Styles have been slammed for an ad campaign in which Styles poses in a teddy-bear t-shirt next to a toddler bed, just a few weeks after the Balenciaga scandal erupted over child imagery.

Both Gucci and Balenciaga are owned by the Kering Group, a French powerhouse fashion conglomerate, and have now turned out to be a name for controversial fashion campaigns, particularly child-imagery related.

Styles appears in the new ‘HA HA HA’ Gucci campaign in an array of outfits and with different props. The images were released on November 2, several weeks before the Balenciaga scandal erupted.

In the set of images, next to a toddler mattress leaning against a wall, Styles is seen standing in front of it wearing a teddy bear shirt and carrying and caressing the mattress.

Calling it a ‘performance piece’ by Styles, Gucci unveiled the images and stated “Play is at the very heart of the Gucci HA HA HA collection…its name after all is the onomatopoeic sound of the written essence of the ‘laughing face’ emoji, as well as the serial crasis of the initials of ‘Harry’ and ‘Alessandro.”

Gucci took to social media to announce their new advertisement campaign ‘HA HA HA’ featuring the singer wearing outfits with different props in the background including this toddler mattress.

Gucci’s new ad campaign has been been served with online backlashes ever since it was announced to the public.

Not only was the brand slammed, but Styles’ was also called out for his participation in the campaign.