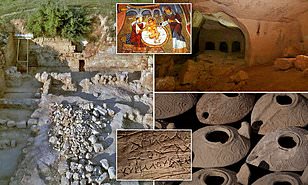 A 2,000-year-old burial cave has been found in a forest in Jerusalem, and it is regarded to be the tomb of the midwife who helped with the birth of Jesus.

It is believed to be tomb of Mary’s midwife following excavations that uncovered inscriptions citing ‘Salome, who was Mary’s midwife.’

The Israel Antiquities Authority (IAA) announced – just days before the Christian world celebrates the birth of Christ – that the carvings in ancient Greek and Arabic are enough to prove ‘this is the cave of holy Salome.’

Teams have also discovered ruins of shops nearby, dating from between the eighth and ninth centuries, that sold oil lamps used in prayer.

Hundreds of complete and broken lamps were found in the forecourt, ‘proving’ that the cave was a place of worship.

IAA archaeologist Zvi Firer said: ‘ We believe that pilgrims would come here, rent an oil lamp, perform their prayers inside, and go on their way.

Salome’s role as an assistant to the midwife at Christ’s birth is recounted in the Gospel of St James.

The Gospel of James, which is ancient non-canonical, is a second-century infancy gospel telling of the conception of Mary, her upbringing and marriage to Joseph and the journey of the couple to Bethlehem, along with details of Jesus as a young boy.

The name Salome (or in Hebrew: Shalom or Shlomit) was a common Jewish name in the Second Temple period, and was also known in the Hasmonean and Herodian families,’ said Firer in a statement.

‘According to a Christian tradition, Salome was the midwife from Bethlehem who was called to participate in the birth of Jesus.

‘She could not believe that she was asked to deliver a virgin’s baby, and her hand became dry and was healed only when she held the baby’s cradle.’

Bible revealed Salome to be the second midwife to Mary.

‘And the midwife went forth of the cave and Salome met her. And she said to her: Salome, Salome, a new sight have I to tell thee,’ the scripture reads.

Her name is shown several times after, with Mary telling Salome not to tell anyone about Jesus until ‘he enters Jerusalem.’

Grave robbers discovered the tomb in 1982 and stole the sarcophagus, but formal excavations were conducted two years later.

While the cave had been previously discovered, the elaborate cave forecourt has only been seen now, for the first time since in more than 2,000 years.

The court, extending more than 3,767 square feet, is surrounded by ashlar stone walls, which are individual stones fashioned into squares.