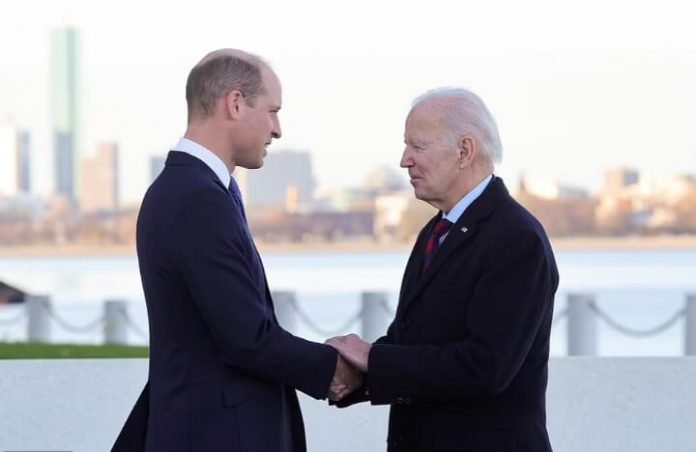 President Joe Biden and Prince William met at the John F. Kennedy library for a private meeting on climate issues and mental health.

They exchanged a friendly chat ahead of their private meeting, which is expected to be on climate change and mental health issues.

“Where’s your top coat,” the president, 80, asked the Prince of Wales, 40, who chuckled in return. Biden wore a long overcoat while William went coatless over his suit on the cold, windy day.

William, in turn, commented on the view of the harbor with downtown Boston visible across the water. “What a spectacular setting,” he said.

The meeting was hastily arranged when it was realized both men would be in Boston on the same day.

Prince William is wrapping up a three-day trip, including hosting tonight’s Earthshot Awards, which is the main reason for his visit while President Biden is in town for a fundraiser for Raphael Warnock, the Democratic candidate in the Senate runoff election in Georgia next week.

When President Biden heard William was scheduled to be at the JFK Library on Friday, he even offered to come to him. Their meeting lasted about 30 minutes and then each man moved on to his next event.

It was a “warm, friendly and substantive discussion,” according to a Kensington Palace spokesman.

But their meeting was disrupted by about 100 protesters, who shouted in the background “f*** the Royal family” and “Joe Biden is a scab.”

Others shouted “Let’s Go Brandon!” – a slogan designed to mock the President.

During their short meeting, President Biden was keen to learn about the Prince’s Earthshot Prize and some of the stories from the finalists, including the Great Bubble Barrier in the Revive Our Oceans category while William shared his global, long term ambition for the Prize.

He also thanked President Biden for travelling to London for the late Queen’s funeral in September and they both shared warm memories of Her Majesty.