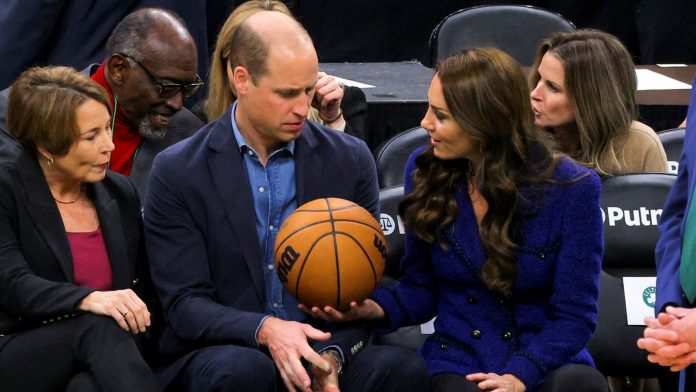 The Prince and Princess of Wales’ first overseas trip since the Queen’s death have been overshadowed by controversy at home.

William and Kate arrived in Boston yesterday for a three-day visit before the Earthshot Prize, the prince’s environmental awards ceremony, on Friday.

Hours earlier, the prince’s godmother resigned from her duties at Buckingham Palace after repeatedly asking a black visitor “where she really came from”.

A Kensington Palace spokesman who spoke to William before he boarded his flight said Lady Susan Hussey’s comments were “unacceptable” and that “racism has no place in our society”.

He added that Lady Hussey, 83, was right to have stepped aside from her honorary role as Lady of the Household with immediate effect.

The monarchy has faced allegations of institutional racism since Ngozi Fulani, a British-born charity boss, revealed what had happened at an event in Buckingham Palace on Tuesday.

Lady Hussey, who served as the Queen’s lady in waiting for more than 60 years, has offered her “profound apologies for the hurt caused”.

William focused on the Earthshot Prize as he greeted crowds in Boston, saying: “We are both looking forward to spending the next few days learning about the innovative ways the people of Massachusetts are tackling climate change.”

However, the royal couple sat through an awkward lecture on race equality by a black reverend as she opened the prince’s awards at the City Hall Plaza.

Reverend Mariama White-Hammond, the city’s chief of environment, energy and open space, urged the audience to “consider the legacy of colonialism and racism”.

“The ways it has impacted people across the world, and its connection, its deep connection to the degradation of land and our planet that we are all seeking to reverse,” she said.

“The stories lost, the species made extinct, but also the persistence of people in the face of oppression and the fundamental dignity of all of our relations.”

She added that under the leadership of Mayor Michelle Wu, Boston had committed to addressing climate change “in a way that has justice at its core”.

“Justice for our environment, for our workers and for all residents regardless of race and economic status,” she said.

“We are leading the change to mitigate the threats of climate change while creating a thriving green economy and reducing economic and racial injustices.”

The Middleton’s Family Life Bringing Up Kate Middleton And Siblings