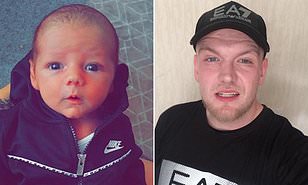 A cannabis-smoking father killed his newborn baby by violently shaking him with force similar to a car crash or a plunge from a tall building, his murder trial has heard.

Meanwhile, he originally claimed he found the infant limp and lifeless in his cot. But he later admitted killing him and pleading guilty to manslaughter.

A post-mortem found that Abel-Jax suffered a catalogue of traumatic injuries, including catastrophic brain damage and severe bleeding and tearing injuries in his eyes, Preston Crown Court heard.

Prosecutor Timothy Cray KC said the damage to the baby’s brain meant he would have stopped breathing and been deprived of oxygen to his brain.

Addressing the jury, Mr Cray said Mailey was in sole charge of the baby at the home on November 28, 2021.

Within an hour of Abel-Jax’s mother, Mollie Gorton, leaving for work at 11.15am, the baby had suffered serious injuries and needed to be taken to hospital by ambulance.

On a 999 call, Mailed first said he had no idea what happened but that ‘he’s gone right limp, he’s gone weird’.

Mr Cray said: ‘The defendant’s initial story was that he had found Abel in his crib and that Abel appeared limp and lifeless.

‘The key thing he was saying then was that he didn’t know what had happened to Abel.

‘I’m afraid what you will hear is that those statements were lies. After speaking to others, he called an ambulance at 12:06pm.

‘Abel died on the evening of Tuesday, November 30 after life support was withdrawn.’

Mr Cray said that doctors agreed the injuries were consistent with ‘forceful and deliberate shaking’. These, the prosecutor said, led to Abel-Jax’s death.

He explained that these injuries are not caused accidentally and said could only otherwise happen in a situation such as a ‘car accident or fall from a multi-storey building’.

Mr Cray said Mailey repeatedly challenged Miss Gorton on whether the baby was actually his because he knew he had a low sperm count.

Tensions between the couple were bad enough for him to move out for a few months before the baby was born. They eventually reconciled but problems remained, the court heard.

Mr Cray told the jury: ‘Another issue was that there was little money in the house but both parents were regular users of cannabis.

‘Mollie says she was trying to cut down her use but that the defendant was unable to do the same.

‘The phone records show that he was arranging to buy cannabis on the Sunday morning that Abel was killed.

‘Although Miss Gorton said she felt their relationship went downhill after Abel-Jax was born, she did not think there was an issue with his childcare ability and believed that he loved the baby and was willing to do his share of the parenting.

The prosecution explained that there were no signs of neglect in the house, which was clean and with family photographs on display, and it appeared that Abel was a very loved, well cared for child.

Mailey was questioned by Miss Gorton over whether he had shaken the baby after he was rushed to hospital but repeatedly denied it.

Once medical examinations were completed, he was eventually arrested in July last year but gave no comment in interview.

Mother, 24, charged over death of her two-year-old daughter appears in court