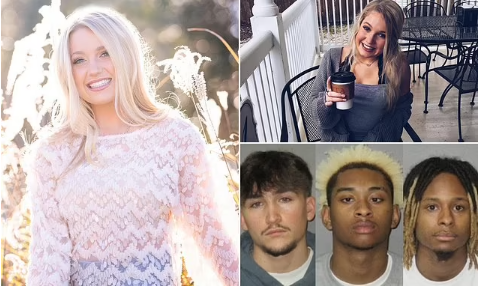 Authorities in Louisiana have arrested four men in connection with the rape and death of a 19-year-old student Louisiana State University student who was struck and killed by a car.

Madison Brooks, 19, who was known as ‘Madi’ to her friends, was hit by the vehicle on January 15 and died later in a hospital in Baton Rouge, Louisiana – the same day.

On Monday night the East Baton Rouge Sheriff’s Office brought several individuals into custody on suspicion of rape in connection with Brooks’ death.

Two individuals, a 17-year-old and 18-year-old Kaivon Washington have been arrested and charged with third-degree rape.

In addition, 18-year-old Casen Carver and 28-year-old Everett Lee were also arrested and charged as accomplices to third-degree rape.

Washington and Carver are graduates of Walker High School. Carver was a member of the baseball team there reports KSLA.

The arrest documents also indicate that Brooks had a blood alcohol level of .319% at the time of her death meaning she was highly intoxicated at nearly four times the legal limit.

Madison was the oldest of three children born to mom 43-year-old Ashley and her husband, Scott, 51.

In court documents seen by DailyMail.com, Washington, one of those charged with Brooks’ alleged rape stated that he had a consensual sexual encounter with her after the group left Reggie’s Bar in Tigerland in Baton Rouge following a night of heavy drinking.

Washington said that he and another teen had intercourse with Brooks in the backseat of a car while Carver and Lee were sat in the front seat.

Carver has admitted that he and his three friends drank at the bar before leaving with Brooks who was ‘very unstable on her feet, was not able to keep her balance, and was unable to speak clearly without slurring her words,’ the arrest document states.

Carver allegedly told investigators his 17-year-old friend and Brooks were ‘hugging and walking together.’

Investigators say Carver told them Brooks asked for a ride home with them. He then told investigators how both Washington and the 17-year-old asked Brooks to have sex with them to which she agreed, the warrant states.

However, Carver has also told investigators he believed Brooks was too drunk to know that she was consenting to sex and he ‘hated it.’

The men claim Brooks then asked to be taken home but say she gave them a number of different addresses before she got out of the car.

Carver says they later dropped off Brooks in a neighborhood near the scene where she was hit on Burbank Drive.

She was killed shortly afterward after she walked into the middle of the road where she was hit by a ride-share vehicle at around 3am.

Brooks was said to have been standing in an unlit portion of the roadway near Pelican Lakes Parkway when she was struck. The driver who hit her has not been arrested and is not suspected of being under the influence.

Under Louisiana law’s third-degree rape charge generally involves a victim who is ‘incapable of resisting or of understanding the nature of the act by reason of a stupor or abnormal condition of mind produced by an intoxicating agent or any cause and the offender knew or should have known of the victim’s incapacity.’

Brooks’ sorority, Alpha Phi at LSU, posted a moving tribute to their sister on Instagram on Monday.

‘Madi was a bubbly, loving, and selfless friend. She left an indelible mark on our chapter, we cherish our memories together and we will never forget her.

‘Our forever friend was also a hero, Madi donated her heart and kidneys to save others.

‘We send our deepest sympathies to her family and friends during this incredibly difficult time. And we respectfully ask for time and space so we may support each other in our healing process.’

Madi attended St. Scholastica Academy, an all-girls Catholic high school, before continuing her studies at LSU, where she was part of the Alpha Phi sorority.

Madison was the oldest of three siblings to her mother Ashley, 43, and her father, Scott, 51.

SARAH VINE: It’s our fear of being branded bigots has left us with a double killer in a children’s classroom – and rapists in...