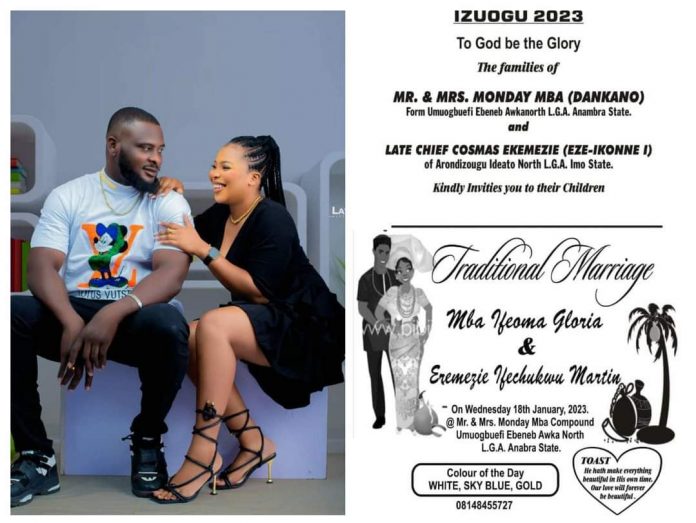 Suspected hoodlums have murdered an intending couple in Imo State.

The victims, Ifechukwu Martin and Gloria Mba, whose wedding was billed for January 18, 2023, were killed on Tuesday at Arondizuogu in the Ideato North Local Government Area of the state.

The groom’s brother, who was driving them, was also killed in the incident, which caused panic in the area.

A resident, who spoke to journalists on condition of anonymity, said the murder required a holistic investigation.

He said, “A young man who was coming home for his marriage was killed in his village yesterday night (Tuesday) with his fiancée and the brother who was conveying them in his Keke (tricycle). This happened at Ndiejezie Izuogu in Ideato LGA of Imo State.

“We complained of this reckless kidnapping, killing and burning of vehicles in Arondizuogu last year and the police spokesman assured me that something was already being done about it.

“But since then, the killing and kidnapping have been happening every day. The people of Arondizuogu did not come back for Christmas and New Year. The few that came could not move around in their cars. As we speak, there was a mass exodus of people from Arondizuogu this morning (Wednesday) after the incident of last night.

“The hoodlums specialise in stealing flashy cars and killing their owners if they refuse to release them. Other times, cars are burnt in the process. We are no longer safe in Arondizuogu. Students are afraid of going to schools; our mothers no longer go to markets for fear of the unknown. Please help us before we are finished.”

The spokesperson for the police in the state, Micheal Abattam, confirmed the incident when contacted by our correspondent.

Ned Nwoko Celebrates His Ex-Wife, Laila Charani, On Her Birthday