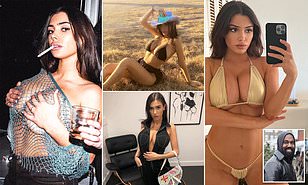 Bianca Censori is seen in revealing photos shared on her now deleted Instagram account over the last three years, before her marriage to Kanye West.

Posing bare-breasted while smoking a cigarette, lounging on the beach in a tiny bikini, and partying in the pool with friends.

The revealing photos came from a now deleted Instagram account and are a far cry from Censori’s newly launched social media pages – which are set to private and include a link to the official Yeezy website.

Bianca secretly married the controversial rapper, 45, in a non-binding ceremony at a resort in Utah two weeks ago.

According to Censori’s Linkedin page, she met the rapper at least two years ago when she took a job as an architectural designer at West’s Yeezy business.

The quiet wedding appears to have taken Censori’s family by surprise, with her sister Angelina telling Melbourne’s Herald Sun that it was ‘exciting news’.

She added: ‘It’s very exciting news for both my sister and the family, but we choose to have some privacy for the time being.’