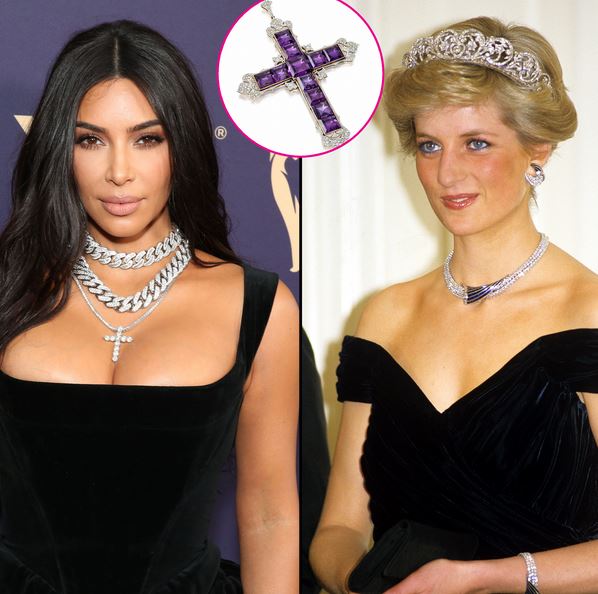 The reality star and businesswoman, Kim Kardashian has reportedly purchased an iconic cross necklace previously worn by Princess Diana for $197,000.

The 42-year-old bought the beloved purple amethyst-and-diamond-encrusted Attallah cross pendant during an auction held by Sotheby’s on Wednesday, January 18.

A source close to the SKIMS founder revealed to Mail Online that Kim is ‘honored to be able to own a fine piece of jewelry once worn by the late princess’ and to add to her growing collection of historic memorabilia worn by ‘strong, iconic women who have inspired Kim.’

‘Diana was a woman of incredible style, beauty, and grace. Kim is honored to be able to own a fine piece of jewelry once worn by the late princess,’ the insider told DailyMail.com.

‘This beautiful cross pendant will be added to her growing collection of jewelry, all pieces that have been worn by strong, iconic women who have inspired Kim.’

The late Princess of Wales, who often made headlines for her bold fashion choices before she tragically passed away in a car accident in 1997, famously wore the glittery piece of jewelry during a London charity gala in October 1987.

She paired the lavish necklace with a black and burgundy long-sleeved velvet gown, which came with a ruffled neckpiece, and between the flashy pendant and the stylish dress, the Princess dazzled at the event.

The enormous cross pendant was made in 1920 by the jewelry company Garrard, and according to Vogue, Diana was friends with the man who owned it, British businessman Naim Attallah. The mogul, who passed away in 2021, loaned it to her for the event.

‘Few people could carry this piece off but Diana really could,’ Naim’s son, Ramsay Attallah, told the outlet in December.

‘When I was growing up, we’d always have it on the table for Christmas lunch, but it was never worn by anyone other than Diana and it hasn’t been seen in public since she died.’

It is now in the possession of Kim, who loves buying clothing and jewelry that were previously owned by famous figures.