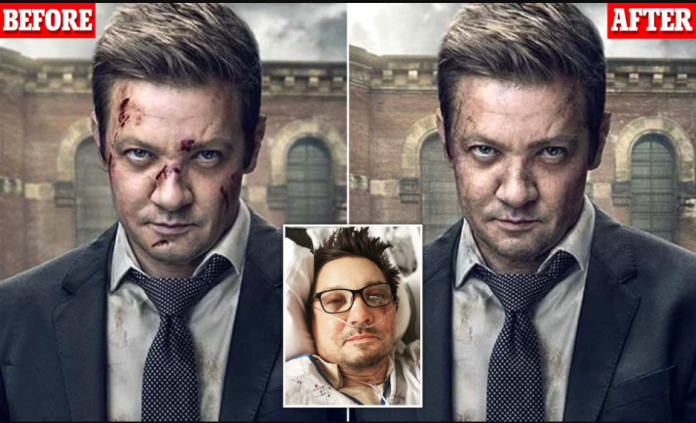 The actor, 52, got into a snowplow incident on January 1, leaving him hospitalized until Tuesday.

Mavel actor, Jeremy Renner’s bloody wounds from The Mayor of Kingstown poster have been removed because they look like injuries he sustained after his snowplow accident.

The actor, 52, got into a snowplow incident on January 1, leaving him hospitalized until Tuesday.

The accident left him ‘worse than anyone knows’ after he was crushed by a 14,000-pound snowplow that ran over him in Washoe County, Nevada, near Reno.

Renner had stopped to help a stranded family whose car broke down close to his mansion when he was run over, leaving him with blunt chest trauma and orthopedic injuries.

He arrived at the hospital in critical condition, but it was downgraded to stable after surgery.

Now, the show deemed the ‘most dangerous show on television’ by the owners, has changed its poster out of respect for Renner because it appeared similar to Renner’s face injury.

Paramount+ has edited marketing material for “Mayor of Kingstown” season two to remove facial wounds from lead star Jeremy Renner’s face and has made the decision to redistribute a rather tamer version of the artwork which shows Renner’s face looking in much better shape, as The Hollywood Reporter first reported.

‘It’s good of the network,’ show co-creator Hugh Dillion told the Hollywood Reporter. ‘Everybody is sensitive to Jeremy.’

Despite Renner horrific injuries, which could take years to heal, the show’s creators, Dillion and Taylor Sheridan, are already working on season three.

Since leaving the hospital, The Mayor of Kingdom star, who plays Mike McLusky on the show, revealed he has been able to watch an episode of the show with his family.

He wrote on social media: ‘Outside my brain fog in recovery, I was very excited to watch episode 201 with my family at home.’

The news comes a day after friends revealed that Renner’s injuries are much worse than feared and that he ‘nearly bled out’ and ‘almost died’ while waiting for help to arrive.

The actor suffered blunt chest trauma and was airlifted to hospital after he was crushed by his own snowplow while trying to clear a driveway near his Nevada home on New Year’s Day.