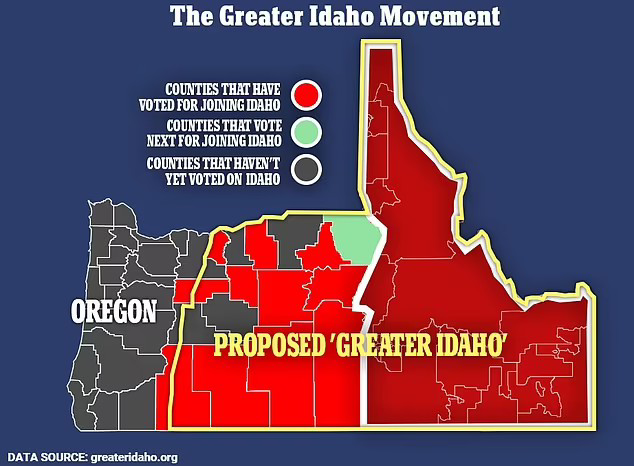 The bill was introduced on January 10 in the wake of Oregon’s recent state elections to move 11 counties to Idaho.

Now the move has taken a step further after a Republican state senator introduced a bill that would allow 11 counties to join their neighboring state.

Eastern Oregon is culturally, politically, economically much more similar to Idaho than it is to western Oregon,’ said Matt McCaw, a spokesman for the Greater Idaho Movement.

‘Our movement is about self-determination and matching people to government that they want and that matches their values. In Oregon, we’ve had this urban-rural divide for a very long time.’

Though the movement has been bubbling for a while, the bill was introduced in the wake of Oregon’s recent state elections, in which a Republican came within four points of winning the governor’s mansion for the first time since 1987.

Eleven eastern Oregon counties have voted in favor of this so far, with four other counties, including Wallowa, included in the proposal to move state lines.

‘Our proposal is to take that border between Oregon and Idaho, which was set almost 200 years ago in a very different time when there was only 50,000 people in the state of Oregon…it made sense then, it doesn’t make sense now to have that border there because that’s not where the cultural divide is,’ McCaw said.

Regardless of how residents vote, to actually change the states’ borders would require lawmakers in Oregon, Idaho and U.S. Congress to sign off on it.

While Idaho Gov. Brad Little said he was sympathetic toward the Greater Idaho cause, he acknowledged that it wasn’t likely to go anywhere.

‘There’s a lot that needs to happen before moving the border is within the realm of possibility,’ Little said.

Oregon Senate President Rob Wagner, a Democrat, does not believe the bill will move forward.

McCaw, however, sees no downside to its passage.