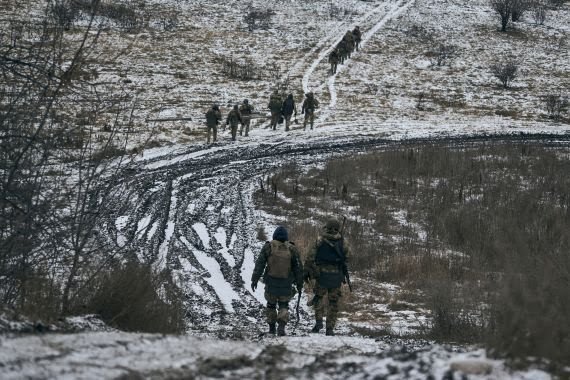 Russian forces have taken the town of Soledar, a salt mine town in eastern Ukraine, according to Russia’s defense ministry – their first significant victory since last year July.

Russia took control of Soledar on Thursday evening, the ministry said in a briefing on Friday, January 13.

In recent days Russia has claimed to be in control of the mining town while Ukraine has also claimed to still be fighting against Russian troops.

Russia said the capture of Soledar was ‘important for the continuation of successful offensive operations in the Donetsk region.’

It added that ‘establishing control over Soledar makes it possible to cut off the supply routes for Ukrainian troops in Bakhmut.

‘The significance of Soledar in military terms is minimal.

However, its capture would allow Russian forces, and especially the Wagner mercenary group, to turn their focus on nearby Bakhmut (totally controlled by Ukraine), which has been a target since last year.

According to the Russian ministry, the capture of Soledar ‘became possible due to the constant destruction of the enemy by assault and army aviation, missile troops and artillery of a group of Russian forces.

‘The ministry made no reference to claims from Russian private military company Wagner that its forces had taken the city by themselves.

‘Over the past three days alone, more than seven hundred Ukrainian servicemen and over three hundred units of weapons of the Armed Forces of Ukraine have been destroyed near the city of Soledar,’ it said.

On Thursday, the Wagner group disparaged claims from the Russian ministry of defense that its forces were involved in the Soledar offensive while Ukrainian officials have repeatedly contested claims that Soledar has been taken.

A Ukrainian military commander quickly rejected the claim, however, saying the ‘severe’ battle was still raging.

Ukrainian troops were ‘bravely trying to hold the line’ despite Russian claims that it had gained control of the region, she added.

Cherevaty, a spokesman for the Ukrainian armed forces’ in the country’s east, was quoted by the French news agency AFP as saying ‘severe fighting’ was still underway, with his troops managing to keep ‘the situation under control in difficult conditions.’