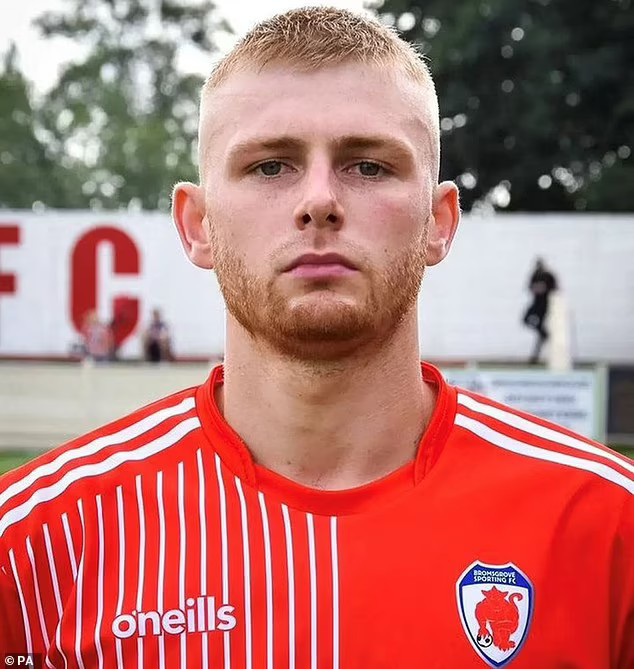 A third man has been charged with the murder of footballer Cody Fisher, who was stabbed to death at a nightclub on Boxing Day.

Reegan Anderson, 18, is the latest suspect to be charged by detectives over the murder of Mr. Fisher, West Midlands Police said.

Two other men, Kami Carpenter, 21, and Remy Gordon, 22, have already been charged with the killing of the 23-year-old from Redditch.

Mr. Fisher was knifed to death while he was on the dancefloor at the Crane nightclub in Digbeth, Birmingham.

Officers from West Midlands Police were called to the club just before 11.45pm after reports of the stabbing. But despite efforts to save him, Mr. Fisher died about 30 minutes later.

Police claimed the talented young footballer had been involved in a ‘fight on the dancefloor’ before being knifed, with officers describing a ‘scene of chaos and evidence of drug use within the premises’.

The venue had its license suspended for 28 days in the wake of the killing amid accusations from police there had been ‘serious management failings’ at the venue on the night he died.

In a review meeting earlier this month, Birmingham city councilors said they will consider whether to close the club permanently in a full review hearing in the future.

Officers from the council’s licensing sub-committee asked for immediate measures to be implemented to ensure public safety and examined whether the club should be stripped of its permission to sell alcohol and whether the supervisor should be removed.

One sergeant’s account said the club’s security guards asked officers to help them with crowd control following the stabbing, while other ‘oblivious’ staff members were ‘wandering around all over the place’ and began cleaning up the crime scene.

‘They have started to clean the dancefloor further down from where the deceased was; officers shouted at them to stop,’ the sergeant said.

The police’s application for the review said Mr. Fisher died during ‘a fight on the dancefloor’ and officers who attended ‘described a scene of chaos and evidence of drug use within the premises’.

Police recovered a knife from the crime scene, and a post-mortem examination has confirmed that Mr Fisher died of a stab wound.

A statement published by the police and attributed to Mr Fisher’s family said: ‘They have broken our hearts; I have lost my best friend. My family and I are asking for privacy and respectfulness at this heart-breaking time.’

Suspects Carpenter, 21, and Gordon, 22, were charged with murder and appeared before Birmingham Crown Court on January 2.

During their court hearing earlier this month, the pair spoke only to confirm their personal details and enter not guilty pleas to a linked charge of affray.

Following a four-minute appearance before two magistrates, Carpenter and Gordon were ordered to reappear before a judge at Birmingham Crown Court on January 30.

The case and several others were listed at Birmingham Crown Court because the nearby magistrates’ court was closed.

In a tweet, the club said: ‘All of us at Bromsgrove Sporting Football Club are deeply saddened to learn of the passing of Cody Fisher.

‘Cody, was a friend to many at the club and we send our deepest condolences to his family and loved ones.’

Football players for Birmingham City and Hull City observed a minute’s silence for Mr. Fisher ahead of their Sky Bet Championship clash at St Andrew’s on Friday.

Husband shot wife, their daughter before turning the gun on himself in a suicide-murder case

Half Moon Bay shooter may have been triggered to kill 7 people by $100 farming repair bill, DA says