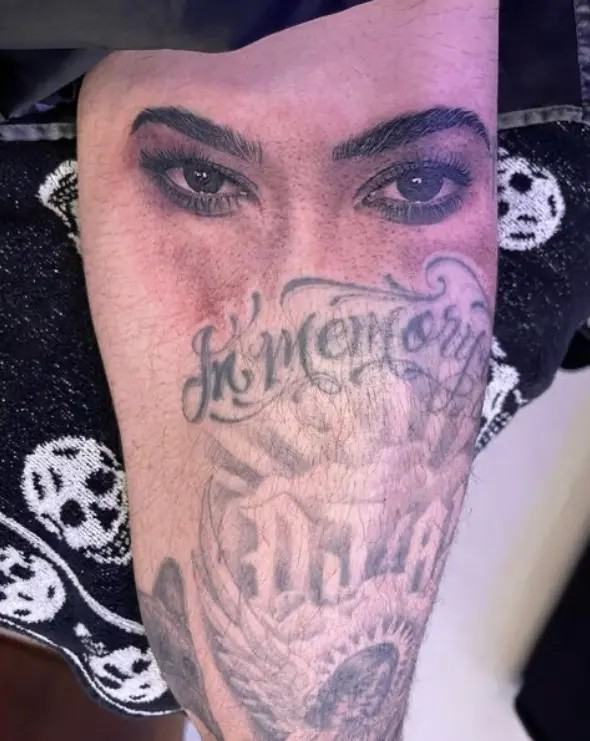 American musician Travis Barker has revealed a new tattoo which features the eyes of Kourtney Kardashian, his wife.

The Blink-182 drummer showed his dedication to his wife by having her features inked onto his body forever, along with his abundance of other tattoos.

This latest tattoo is on his thigh and he splashed it all over Instagram at the weekend, much to the delight of his fans and the fans of Kourtney.

One of the selfies on the carousel showed the shirtless musician lifting up the right leg of his shorts to show off his new tattoo.

He also posted a close-up of the tattoo, along with a photo taken by Kardashian, which showed it hidden behind her.

The Poosh founder, 43, wore a long-sleeved shirt dress, and appeared to giggle as her husband grabbed her thighs and crouched to the floor.

This is not the first time Travis dedicated a tattoo to his wife. When they started dating in 2021, he got Kardashian’s name tattooed on his chest and ‘I love you’ on his forearm.

When asked on Today about her favourite piece of artwork on her husband’s body, the Kardashian star replied: ‘The Kourtney, of course.’

The couple married three times in 2022, originally in a fake wedding in Las Vegas in April.

Then the couple legally married in a Santa Barbara courthouse on May 15, 2022. Then again in a ceremony with their children.

Woman shares horrifying videos of herself having her eyeballs tattooed black