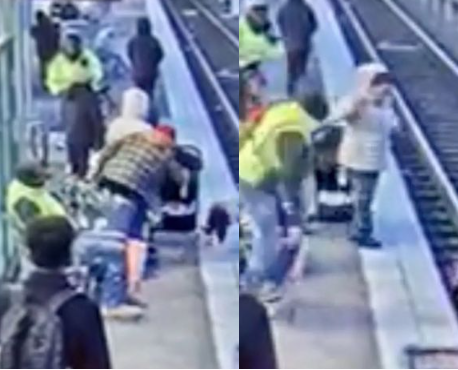 A woman has been arrested after she was caught on CCTV pushing a three-year-old girl onto a live train track.

The toddler had been standing next to her mum on Portland’s Gateway Transit Center MAX platform in Oregon, US, when she was pushed.

‘An Oregon woman is being held without bail after she was taken into custody for allegedly pushing a 3-year-old child onto train tracks while the child and mother were waiting for their train to arrive,’ the Multnomah County Sheriff’s Department said in a statement.

CCTV footage showed the woman sitting behind the toddler before suddenly standing and pushing her onto the tracks below.

The child fell face first and hit the rail. Kind strangers helped pull her back to safety before the next train arrived.

The child later reported a severe headache and had a small red mark on their forehead.

‘There’s no excuse for that. I don’t understand why someone would do something like that,’ MAX rider Blaine Danley said while speaking on the incident.

Police revealed the 32-year-old woman has been arrested and charged.

Multnomah County District Attorney Mike Schmidt said in a statement: ‘Today Brianna Lace Workman, 32, was arraigned on Attempted Assault in the First Degree, Assault in the Third Degree, Interfering with Public Transportation, Disorderly Conduct in the Second Degree and Recklessly Endangering Another Person.

‘The charges stem from an incident on the evening of Wednesday, December 28, at the Gateway Transit Center MAX platform in Northeast Portland.

‘A mother and child were waiting for a MAX train when Workman allegedly shoved the child, aged three, off of the platform and onto the MAX train tracks without provocation.

‘The child landed face-first onto the metal rail and rocks before being quickly rescued from the train tracks. The child reported a severe headache and had a small red mark on their forehead after the incident.

‘The Multnomah County District Attorney’s Office has filed charges, including an offense for which Oregon law permits pretrial detention, and is requesting that Workman remain in custody and be held without bail.

‘A charging document is only an accusation of a crime. Workman is innocent unless and until proven guilty.’