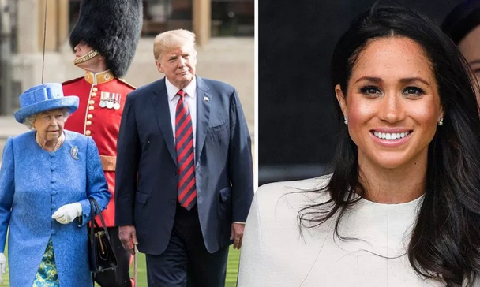 Donald Trump has expressed shock at comments Meghan Markle made about him during his 2016 Presidential campaign.

The US President branded her words ‘nasty’ in a move that is unlikely to go down well ahead of his UK state visit next week.

The Duchess of Sussex once called Mr Trump ‘misogynistic’ and ‘divisive’ before backing his rival Hillary Clinton for the top job. She also hinted she would leave the States if Mr Trump won, adding ‘you don’t want to live in the kind of world that he is painting.’ In an interview with The Sun, the US leader said: ‘I didn’t know that. What can I say?

‘I didn’t know that she was nasty.’

Mr Trump will be meeting Meghan’s husband Prince Harry as well as the Queen, Prince Charles, William and Kate during his trip, which begins on Monday. Meghan will not be present as officially she is maternity leave following the birth of Archie last month.