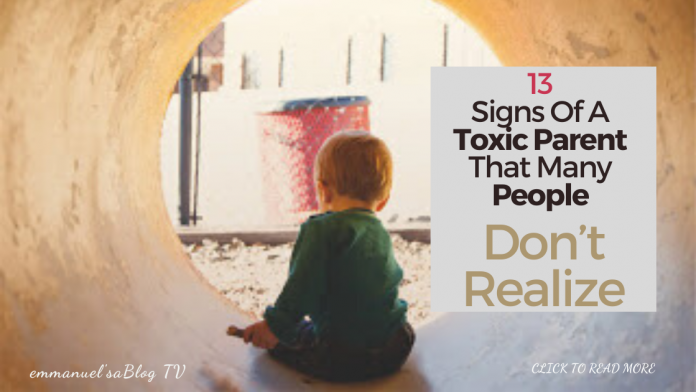 There are toxic people everywhere we go. We meet them whenever we go out but what we fail to understand that most of these toxic people we meet are equally parents. Parents have always been looked upon as the people responsible for raising responsible and important individuals in the society. However, these parents can also exhibit harmful or dangerous traits that can make them a danger to their own children. How do you identify traits in parents that are toxic? Here are 13 signs that a parent is toxic.

1. They Are Too Controlling

A toxic parent will never go about things the normal way. They will use certain things to bend you to their will and make sure they have their way in the end.

Everyone has boundaries and is entitled to their own privacy. A toxic parent would not pay mind to anyone’s privacy, not even their children’s. They are under the impression that they can do whatever they want and whenever they want to because they are the parent.

See Also: What You Want Versus Need in a Relationship: This Is What Your Zodiac Says For 2020

4. Will Never Admit To Their Faults

Everyone who does something wrong will at least have the courtesy to admit, even to themselves that they are wrong. A parent who is understanding and wise will own up to their mistakes when they are wrong, but a toxic parent will never admit to being wrong. They see it as a sign of weakness. Instead they put the blame on someone else.

A toxic parent sees everything as a competition. Like normal parents, they can never encourage or cheer you up when you are doing something nice. Instead, they see everything as an opportunity to battle with you just to show you that they are better off than you are.

6. They Are Unnecessarily Cruel

Toxic parents will do everything possible to bring you down. They do so by being mean with their words and actions. Although they may see it as a way of correcting you, but this is a very inappropriate way as it leaves psychological scars on the child. Read page 2 for more