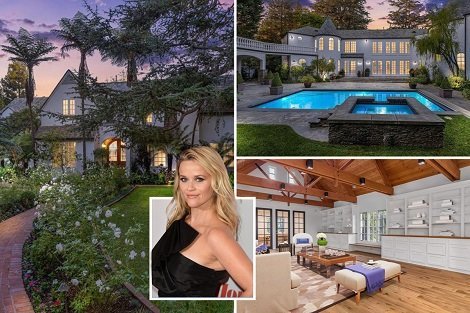 Reese Witherspoon has quietly scooped up a $11.9 million Tudor-style home in Los Angeles, less than two months after unloading her nearby $17 million mansion, DailyMail reveals. Located in the affluent suburb of Brentwood, the 8,652 square foot home is nestled inside a wooded enclave that features a pool, spa and top of the line kitchen.

With six bedrooms and eight bathrooms, it offers plenty of space for her family of five – her husband Jim Toth and her three children Ava Elizabeth Philippe, Deacon Reese Philippe and Tennessee James Toth.

Reese Witherspoon, 44, wasted no time in snapping up the property after she sold off her $17 million Pacific Palisades mansion to an all cash buyer in April. News of the actress’ pricey digs comes after she was scrutinized this week for reportedly pocketing $6 million from Quibi while the new streaming service was facing laying off some staff.

Reese Witherspoon’s new home boasts a string of luxury amenities including a kitchen suitable for a gourmet chef and a breakfast nook. The stately two-story foyer opens up to a great room filled with natural light from the wide windows with dark wooden beams lining the ceiling.

The master bedroom is outfitted with a fireplace, ‘rotunda lounge, lavish spa-like bath, ample closet space and an exclusive balcony,’ according to real estate company Smith & Berg Partners. The master bathroom features an impressive claw foot tub, a chandelier above it and a floor to ceiling mirror behind the tub.

In April, the Little Fires Everywhere star sold her 10,000 square-foot Pacific Palisades mansion for $17 million, having bought it unfinished in 2014 for $12.7 million.

The home had long been the main residence of Witherspoon and her second husband Toth, who she married in 2011 and shares seven-year-old son Tennessee with. Witherspoon also has a 20-year-old daughter Ava and 16-year-old son Deacon from her marriage to actor Ryan Philippe. The couple divorced in 2008.