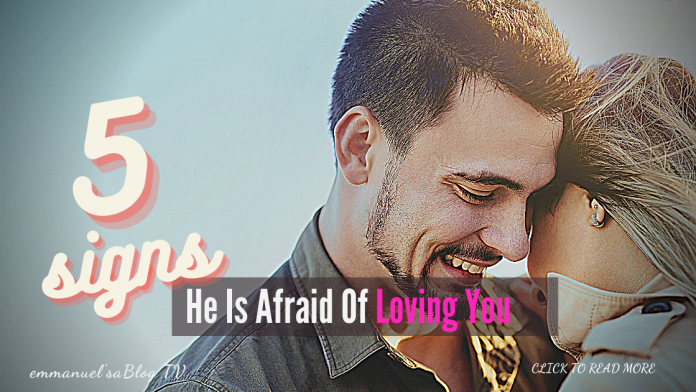 Like women, men are also in love with the idea of falling in love. The problem however, is that they would rather not show it. They keep their emotions and affection hidden and would rather act uninterested and not talk about it, but deep down, they want the same things we do when it comes to love. When men act the way they do with their emotions, it can lead us to believe that they do not care. 5 Signs He Is Afraid Of Loving You.

Perhaps the reason why he is acting the way he is, is because he is scared or nervous of doing or saying the wrong things, or he is not showing how much he adores you because his past relationships didn’t end well so he is afraid of loving again for fear of being hurt again. Below are 5 signs that tell you that a guy really likes you, but is afraid to show it.

5 Signs He Is Afraid Of Loving You

#2. He Is Over Protective Of You

A man who truly loves and care about you will go out of his way to make sure you are safe, even when it is not really necessary. Within him, there is always that fear that you might get hurt, so he does everything in his power to protect you and ensure that you are safe. This will include doing things like walking you to your car and waiting for you to drive off before leaving. This is one of the signs that he will not hesitate to protect you, but might hold back in telling you he loves you.

When you notice that he is trying to put up some distance between himself and you, it is not because he hates you, it is simply because he is beginning to feel too attached to you, and does not want that just yet. One minute he is all over the place, calling every time to find out how you’re doing, and the next minute, he is not keeping in touch because he is ‘busy’. When this happens, you must understand that men are not as emotional as women are, and thus they do not like it when they feel too attached. Give him some space, he will definitely come around.

He may not be quick to confess his undying love for you, but be rest assured that he will be there when you need him. He may not confirm it with his words how much he loves you, but his actions will definitely tell you that. He will provide emotional support, physical support and even moral support, just to show you he cares.

4 Interesting topics for you today:

#5. He Gives Off Mixed Signals

Nothing is as confusing as a guy who is trying so hard not to show he loves you. He will give off all kinds of mixed signals because he is equally confused himself on how to act. He does not want you to think he does not like you, but at the same time, he does not want to come off as clingy. So what does he do? One minute he is all over you, and the next minute, he is emotionally distant. It is probably because he has been in a relationship that didn’t end well and is scared of going through the same thing again.

What are the reasons to not date a guy that just came out of prison? By Sarah Takahashi