Emmanuel's Blog
Home Blog Dad of Girl, 18, who was shot and killed at a Movie... 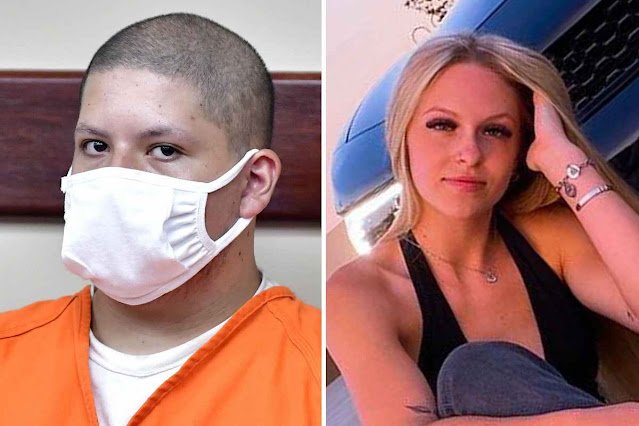 The father of a Young woman who was shot in the head and killed in an ‘unprovoked attack’ at a southern California movie theatre, yelled ‘Look at me, bro!’ at her alleged killer as he appeared in court on Friday.

The dad of 18-year-old Rylee Goodrich, David, demanded the suspect to look in his direction as Joseph Jimenez,20, was led through the courtroom in handcuffs.

‘Hey, look at me, bro! Look at me, dude! that was my…’ the distraught parent said before breaking down in tears to be comforted by a friend.

Jimenez turned his face for a moment towards the woman’s father.

Goodrich,18, and her boyfriend, Anthony Barajas,19, a well know TikTok user, were found late on Monday night by employees after a 9;35pm showing of the Forever purge at a theatre on Corona.

They had each been shot in the head. Goodrich died at the scene. Barajas was taken to a nearby hospital, where he remained on life support Friday, the Riverside County District Attorney’s office said in a statement.

Defendant Jimenez appeared in Riverside County superior court on Friday but didn’t enter a plea and his arraignment was continued to next week.

Jimenez has been jailed since his arrest and he has been charged with murder and attempted murder. it’s not clear whether he has retained an attorney who can speak for him.

There was no known connection between the victims and the defendant, authorities said he has no previous adult criminal record.

‘Based on the evidence provided to our office, this appears to be a random and unprovoked attack,’ the statement said.

Police detectives identified Jimenez as a suspect and arrested him on Tuesday seizing a handgun of the same calibre as the one believed to have been used in the shooting.

Police recovered Goodrich’s wallet and other possessions from Jimenez’s home less than 24 hours after the shooting.

There was only a small audience for the showing of the movie, with only six tickets purchased, police said.

Prosecutors also filed a special circumstance allegation of lying in wait which makes him eligible to receive the death penalty.

On Friday night, two memorial events were held in honour of Rylee.

A source close to the Corona Police Department said Jimenez told Detectives he has been hearing voices.

But David said he believes that the 20-year-old is merely trying to cut himself an insanity plea deal and that the stolen wallet shows the young man knew what he was doing when he allegedly shot the two teenagers.

The bereaved father, who works as a private investigator, told DailyMail that Rylee met Anthony at a party on the July Fourth weekend and that she was excited to begin a relationship with him.

The 43-year-old said police told him they believe it was a random attack, and that Jimenez intended to steal from the young couple.

He described his daughter as ‘passionate and hardworking’, attractive, sporty, and popular but not conceited.

The private investigator said his daughter’s murder could have been prevented if movie theatres had installed metal detectors.

The Goodrich family set up a GoFundMe to help pay for funeral and memorial expenses, which has now raised over $62,000

Anthony Barajas family also set up an online fundraiser (GoFundMe) to help pay for his medical bills, which has since raised over $72,000