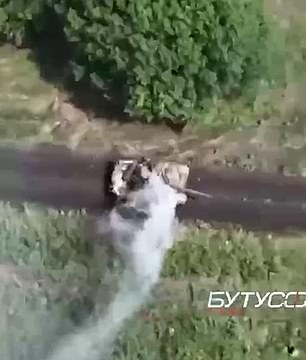 The £3 million weapon of war was considered one of the best tanks in the world, but a spate of destruction since the start of the Russian invasion has cast that into doubt.

The video published on the Telegram channel Butusov Plus appears to show the T-90, nicknamed “Vladimir”, wiped out after its own ammunition was hit by a missile.

Ukrainian veteran Butusov, who has more than half a million YouTube subscribers, claimed the attack was carried out by the Kharkiv air defense force.

The T-90 is blown to pieces after its internal ammunition appears to have been hit by a missile. The Kharkiv Air Defense Force was consistently in charge. Within hours, the incredible footage had well over 80,000 YouTube views.

At least 20 Russian T-90 tanks plus two advanced T-90Ms, first built in 2016, are believed to have been destroyed so far, open intelligence source Onyx claims.