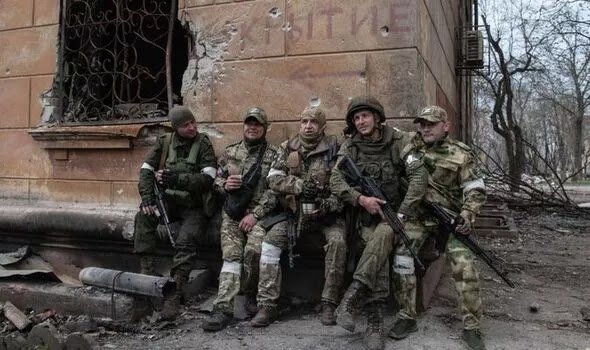 If such a withdrawal by Russia is verified, approximately 20,000 Russian troops will be left stranded from their superiors and from key supply lines due to the river which is half a mile wide. The Dnipro river has been key to the conflict with Ukrainian forces destroying its main bridges and therefore Russian supply lines in the region of occupied Kherson.

Vitaly Kim, the Governor of the Mykolayiv district in southern Ukraine near the Black Sea revealed that the entire Russian command staff were withdrawing from the west bank of the river.

The Governor posted a message on the social media app Telegram, in which he used a common derogatory word to describe Russian soldiers.

Vitaly Kim said: “I feel just a bit sorry – but not much – for the stupid orcs who had been abandoned on the right bank of the Dnipro.

“All of the commanders are moving to the other side.”

Once again, such poor military tactics from the Russian army are proving to be a point of embarrassment for Putin who believed he would conquer the main cities of Ukraine in a matter of days.

Early in the invasion of Ukraine which began at the end of February, Putin’s troops attempted to cut off Ukraine from the Black Sea by moving from the annexed Crimea area to then take land in separatist areas of Eastern Ukraine.

The troops then hoped that a move to the west would see Russia connect with pro-Russian separatists in Moldova, therefore creating a land bridge cutting off Ukraine.

While Russian focus changed to occupying Kherson, they abandoned advances in Mykolaiv which meant that the small Russian-controlled area was vulnerable and in between the frontlines of the Dnipro River in the east and the Black Sea towards the south.

With Russian troops distracted in Kherson, Ukrainian troops have targeted Russian supply lines in which the bridges crossing the river were key as all supplies must cross them.

The UK Ministry of Defence said on Saturday that the two main bridges for vehicles to the vulnerable Russian-controlled area “are now probably out of use for the purposes of substantial military resupply”.