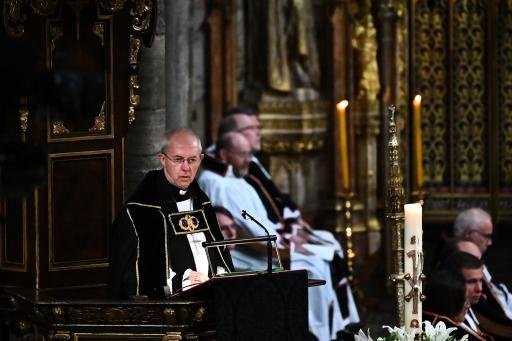 The Archbishop of Canterbury appeared to stare straight at Prince Harry and Meghan Markle during his funeral sermon for Queen Elizabeth II Monday — in what many have speculated was a subtle dig at the estranged royals.

Justin Welby, the religious head of the Church of England, appeared to look right at the exiled couple as he damned “those who cling to power and privileges,” numerous royal watchers highlighted, accusing him of throwing shade.

The archbishop made the biting comment as he praised the late monarch as one of the “people of loving service” who “are rare in any walk of life.”

“Leaders of loving service are still rarer. But in all cases, those who serve will be loved and remembered when those who cling to power and privileges are forgotten,” he said.

Footage of the sermon appears to show him staring intently toward the section of Westminster Abbey where Harry and his wife were sitting behind Harry’s dad, King Charles III. Harry was also forbidden from wearing his military uniform and from saluting his grandmother’s coffin during the procession.

Many on Twitter insisted the religious leader was making a dig at the Duke and Duchess of Sussex, who have repeatedly trashed Harry’s family after quitting as senior royals in 2020, including accusing them of bullying and racism.

“The Archbishop of Canterbury just called out the whole room for clinging to power and privileges and basically saying no one will remember any of them because of it,” one royal watcher tweeted.

“Boss move,” she said, saying she was “dying of laughter.”

Welby’s sermon went on to call the late Queen “joyful, present to so many, touching a multitude of lives.”

“We pray especially for all her family, grieving as every family at a funeral — including so many families around the world who have themselves lost someone recently — but in this family’s case, doing so in the brightest spotlight,” he said.