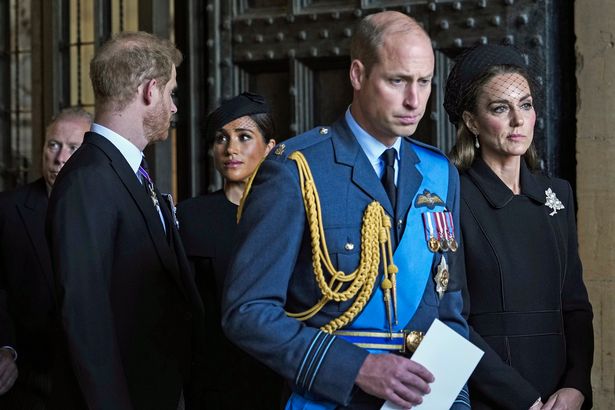 Prince William and Kate Middleton “felt a sense of relief” when Prince Harry and Meghan Markle departed following the Queen’s funeral, according to reports.

Harry and Meghan are expected to return to the USA soon as the nation’s period of national mourning nears its end.

The Duke and Duchess of Sussex happened to be in the UK when the Queen died and extended their stay to mourn the Prince’s grandmother with his family.

Although Harry has stepped back from royal duties, he and Meghan took their place alongside his family for the ceremonies of the Queen’s state funeral on Monday and joined William and Kate in meeting members of the public at Windsor in the days after the Queen’s death.

But the new Prince and Princess of Wales are said to have ‘felt relief’ when Harry and Meghan left in the hours following Monday’s funeral.Vanity Fair royal correspondent Katie Nicholl said: “After Harry announced their departure, William summoned aides to address the future, in what has been referred to by some in William’s circle as the “Anmer Summit.”

“But William and Kate also felt a sense of relief, that “the drama was gone” when Harry and Meghan left, as a source told me. To this day, William still cannot forgive his brother.”

It comes as a source close to the Royal Family told US Weekly that Harry and Meghan are anxious to return home to the US to see their children.

“Meghan and Harry are preparing to return to Montecito almost immediately after the funeral, where they’ll be reunited with Archie and Lilibet after being separated for over two weeks,” the insider said.

They also noted it was the “longest amount of time” the couple had spent apart from their children.