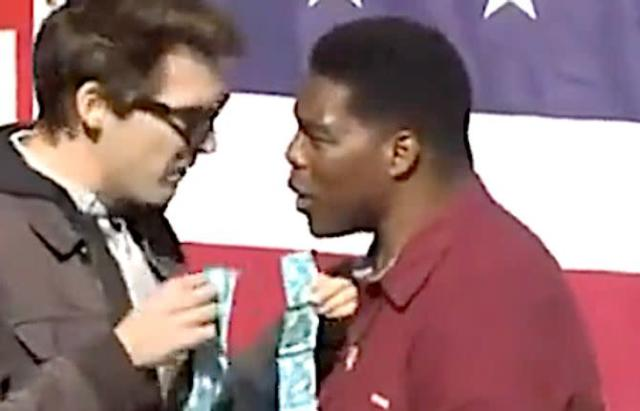 A comedian was filmed trying to give Georgia Republican Senate nominee, Herschel Walker, condoms on stage after a campaign event.

On Thursday, October 20, Jason Selvig, of the comedy duo The Good Liars, appeared onstage alongside Mr Walker at a campaign stop in Macon, Georgia.

He attempted to hand the former NFL star some condoms but Mr Walker appeared to reject it and walked away to talk to other people.

This comes after allegations broke in recent weeks that Mr Walker paid for and urged a woman to have two separate abortions, despite saying he is pro-life on the campaign trail.

Mr Walker reportedly told an unidentified girlfriend to have an abortion in 2009 and later gave her $700 as reimbursement, according toThe Daily Beast.

The woman cited receipts as well as a “get well” card sent by Mr Walker.

The same woman later told The New York Times that Mr Walker “urged her to terminate a second pregnancy two years” after the first. That request prompted her to end their relationship and the pair now share a 10-year-old son.

ABC News’s Linsey Davis asked Mr Walker during an interview after the revelations broke if he ever had “a conversation with this woman … about an abortion?”

Mr Walker said he hadn’t and rejected the idea that he’d ever given her money for an abortion.

He went on to insist that the woman was “lying”.

Walker also appeared on Hannity on Fox News, saying that it was “a flat-out lie”.

Watch the video of Walker being presented with a pack of condoms below.