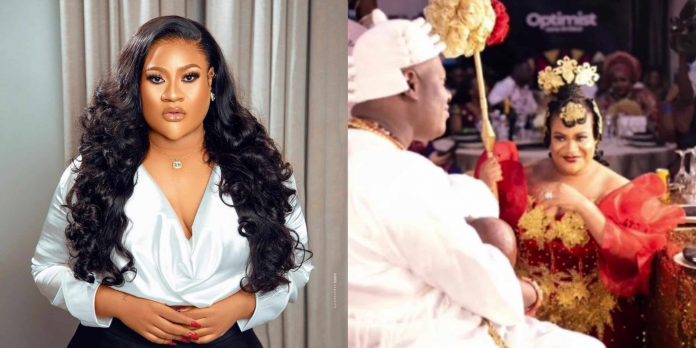 Within the last two months, the Ooni has married six new wives, adding to the wives he already has, it is obvious the Ooni has the money to take care of all these women. This may have been the reason why Nkechi Blessing decided to try her luck by reaching out to the Ooni stating her interest to be one of his wives.

The actress Nkechi has become increasingly popular over the last couple of years for her failed marriage and relationships and her publicity about it. She has no problem whatsoever going online to rant about her exes and how unfortunate they are.

Recently, the 33 years old actress reached out to the Ooni of Ife by posting a photoshopped image of herself kneeling before the Ooni in a traditional attire, along with the words ”Ooni of Ife, sir, I am patiently waiting for my turn…thank you in advance sir”

It is unclear if she meant all she said or if she was just being funny and trying to take a jab at the traditional ruler for his recent marriage spree. Nonetheless, her comment and posts has exposed her to backlash and hate comments from public and people like Uche Maduagwu.

However it turns out, we trust Nkechi Blessing to always defend herself from online haters and carry her weight.