Emmanuel's Blog
Home Royal Family If King Charles III Had Had An Illegitimate Son Prior To William,... 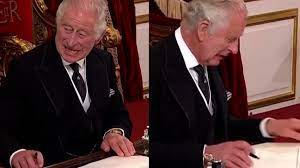 The British royal family has always fascinated countless fans worldwide, who either ceaselessly follow the royals’ latest news and gossip or tirelessly churn out what-if scenarios concerning the royalty. One common area of speculation is that of illegitimate children of royals with respect to their chances of joining the line of succession.

One curious royal family fan posted: “If a British royal (e.g., Prince William) had an illegitimate child and then married their mother after the child was born, would the child have a place in line to the throne?”

For Elizabeth Anne Nield, who described herself as an ardent Anglophile and royalty obsessed, the answer is a simple no. “Children born out of wedlock do not have a claim to the throne, even with a subsequent marriage of the parents,” she explained.

Neild cited the case of Lady Emily and her brother Hon. Benjamin Lascelles, children of David Lascelles, 8th Earl of Harewood (Prince Charles’ second cousin), who were born before their father married their mother. “They were subsequently legitimized by that marriage,” Neild wrote.

“However, their younger brother Alexander, not Benjamin, is Viscount Lascelles. He is the heir to the earldom and in line for the British throne, while his two elder siblings are excluded,” she added.

Going back to Prince William’s hypothetical love child, the child will still not earn a place in the line of succession even if William later divorces Kate Middleton and marries the child’s mother. Again, this is just a hypothetical scenario since the Duke of Cambridge has no known love child, nor has he expressed plans to divorce his wife at all.

People at The Royal Forums are wondering why there is this restriction in the first place. “There has been so much fuss about adopting gender-blind primogeniture lately but, as far as I know, nobody has yet stopped to wonder: why shouldn’t illegitimate children be granted succession rights equal to those of legitimate children?” a user called Kotroman posed this thought-provoking question.