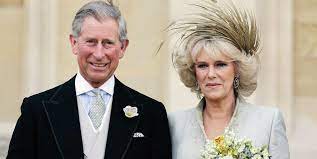 The pair were driven to church for the first time since the period of mourning for the Queen ended on Monday.

The King looked smart in a tweed jacket worn with a green and red tie, while Camilla donned a navy coat with a tartan collar, which she teamed with a red beret adorned with an eye-catching feather and matching pearl earrings and necklace.

Royal watchers were obviously keen to see the couple, as they lined the route into the church and waved to the King and Queen Consort.

The couple also attended church last week, on the last day before the official period of mourning ended.

The King wore a smart black suit, while his wife was dressed in all black but covered her legs in a plaid blanket in shades of grey and black with subtle red detailing.

Queen Elizabeth II traditionally attended church at Crathie Kirk when she was in Scotland, and her family often joined her. Her eldest son and heir appear keen to keep the tradition going.

He and Camilla returned to Scotland following the Queen’s funeral, and are understood to be staying at Birkhall, their home on the Balmoral estate.

Their Scottish residence has been described as “a unique haven of coziness and character” by the King himself and is where he and Camilla spent some of their honeymoon following their wedding in 2005.

Charles inherited Birkhall from his grandmother the Queen Mother when she died in 2002 and often spends summers there with his wife.

He also inherited his grandmother’s Scottish holiday home, the Castle of Mey, later opening a bed-and-breakfast within the property’s grounds.