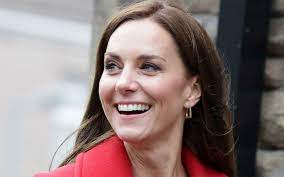 The Princess of Wales held a special audience with 14 men from the Royal Navy’s Ship Company of HMS Glasgow at Windsor Castle. There she chatted about how the ship build is going and what life is like in the Royal Navy.

The thoughtful outing delighted Kate’s fans who flocked to the comments section of a post showing photos from the special day that was shared on the official Instagram page for herself and her husband Prince William.

“Always so proud of Princess of Wales,” one fan penned. A second added: “Ah a surprise engagement!! Love this,” alongside a heart eyes emoji. A third replied: “Such a powerful picture, the last one!”

A fourth commented: “She’s the epitome of grace, elegance, and beauty.”

The photos from the engagement showed Kate beaming from ear to ear as she was pictured holding conversations and posing alongside the shipping company. She opted to wear a navy blue suit for the outing which was paired with a classic, crisp white shirt and fabulous navy stilettos.

As for her hair, the doting mother wore her iconic brunette tresses down and styled with subtle curls at the ends of her locks.

Alongside the post read the words: “A pleasure to meet some of the @royalnavy Ship’s Company of HMS Glasgow, learning more about their roles and what’s next on the route to getting her in the water.”

HMS Glasgow is currently under construction and will be the first Type 26 frigate to be built for the United Kingdom’s Royal Navy. HMS Glasgow has been designed to support anti-submarine warfare, air defense and general purpose operations.

The late Queen approved the appointment of The Princess of Wales as Sponsor of HMS Glasgow, a 21st-century warship, in June 2021.