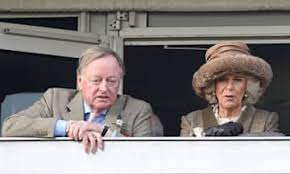 Stepping up to the plate, Brigadier Andrew stood in for his ex-wife of 22 years at John Bowes-Lyon’s poignant funeral service. The moving ceremony took place at the Oratory in London.

John was the son of Major General Sir Frances Bowes-Lyon, a first cousin of Queen Elizabeth The Queen Mother. Sir Frances was a descendant of the 13th Earl of Strathmore and became a Gentleman Usher to the Royal Household.

In a touching obituary published in The Telegraph, a relative penned: “John Francis died peacefully on 18 September 2022. Much loved brother of Fiona and David.”

The Earl of Rossyln represented King Charles III who was similarly absent from the funeral service. The Earl, Peter Loughborough, was appointed as Master of the Household at Clarence House in 2014. Details of Camilla and Charles’ absence were recorded in the Court Circular.

The couple’s absence comes after Camilla and Charles took part in a surprise joint engagement in Walthamstow. On Tuesday, the King and Queen visited the youth centre Project Zero after a teenager asked for their number during the Platinum Jubilee celebrations.

Project Zero endeavours to keep youngsters off the street and away from gangs and crime. Founded by Stephen Barnabis in 2019, the inspiring scheme engages young people in positive activities to promote social inclusion and reduce anti-social behaviour.

The organization provides a safe place outside of school hours, offering an array of hot and cold meals for all participants. In addition to providing workshops and regular events, Project Zero moreover supports young people with their mental health and employment opportunities.

Chatting to a group of children, the King asked the kids about their upcoming half-term break at which point one student cheekily quizzed: “How old are you, King Charles?”