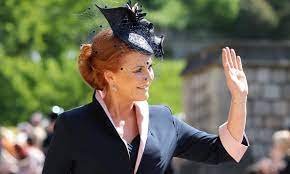 So, she wasn’t going to let Eugenie’s wedding anniversary this week pass by without fanfare.

Sarah – who split from Prince Andrew in 1996 – delighted fans by sharing a reel of photographs from Eugenie and her husband Jack Brooksbank’s nuptials back in 2018.

Followers adored the post with one telling Sarah: “Love it! What a proud mother you must be! Two beautiful daughters and two beautiful marriages.”

A second remarked: “It was such a beautiful wedding; so natural and unstaged. Loved how you went over to the well-wishers; again so naturally you. Wishing them a very Happy Anniversary.” A third noted: “Such a beautiful tribute to Princess Eugenie and Jack!” And a fourth said: “Eugenie looked stunning!!! And so happy!!!! Wishing a happy anniversary to them!”

The bride looked beautiful in a long-sleeved dress designed by Peter Pilotto and Christopher de Vos, featuring a neckline that folded around the shoulders, a low V-shaped back and a ground-sweeping train.