Emmanuel's Blog
Home Entertainment Nollywood The Ooni is looking for an Olori not radio without battery- Uche... 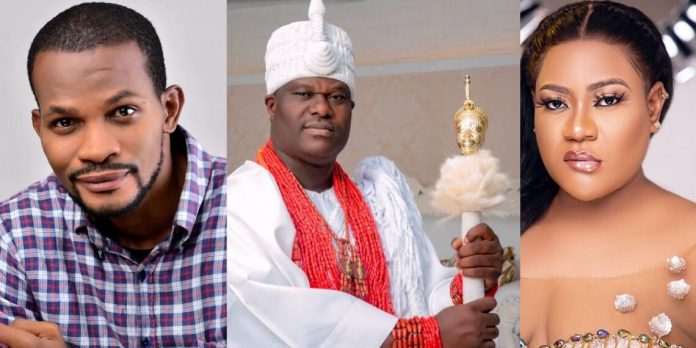 Uche Maduagwu has given Nkechi Blessing Sunday a clap back after the actress voiced out her interest in marrying the Ooni of Osun state, Nigeria

Anyone who is up to date with the Nigerian dramatic news and information must have heard of the recent marrying spree of the Ooni of Ife in Osun State, Nigeria.

After posting a photoshopped image of herself kneeling down beside the Ooni, Nollywood actress Nkechi Blessing has indicated her interest in being one of the Ooni’s wives.

Controversial figure Uche Maduagwu, who is known for his famous replies, clapback and comments about popular Nigerian public figures has replied Nkechi and made his point regarding her posts.

Uche replied Nkechi saying ”The Ooni is looking for an Olori and not a radio without battery” obvioisly referring to the actress habit of replying back to critics or anyone who tries to insult or shame her. He also went further to accuse the actress of being desperate for marriage.