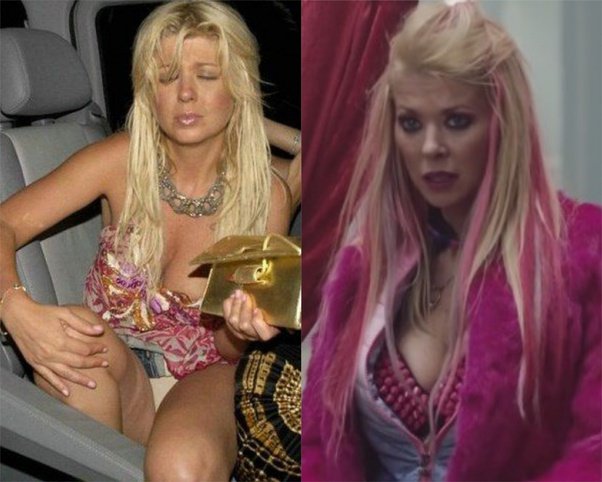 To this day I’m still shocked at how a B-movie managed to save Tara Reid’s career and her personal life.

Tara was never seen as a great actress, and I doubt she ever will, but she was willing to show her body and that was her way to stay relevant and to have roles in classic movies like The Big Lebowski and American Pie. But that all changed in 2004 when she had a body contour procedure and a boob job that unfortunately, for her, the world got to see when she attended Diddy’s birthday party:

She had the procedures to try and improve her body (which didn’t need any improvement) but they didn’t go as planned and she suffered for it: “My stomach became the most ripply, bulgy thing. I had a hernia, this huge bump next to my belly button. As a result, I couldn’t wear a bikini. I lost a lot of work.”

She was now known as “the nip slip girl” in Hollywood and because of the damage to her body, nobody wanted to hire her, so she turned to the only thing that would comfort her… alcohol and drugs. She became known for her drunken behaviour and started going out with the likes of Lindsay Lohan and Paris Hilton at the time.

One day she received a script for a B-movie called Sharknado, and though she admitted that the script was the silliest thing she had ever read, she had no choice but to take it. The movie was such a hit that she ended up leading 6 movies, and her career was once again boosted and she hasn’t stopped working since then. She stopped abusing drugs and alcohol and appears to be on the right path once again.

Another that shocked: The American Pie actress took to Instagram and posted a picture of herself with a large bruise across her forehead. She was also seen with mascara streaks down her face.

She wrote: “Everyone be kind to each other. This is what bullying looks like #Worthless.”

Fans spoke of their concern before Tara clarified on Twitter that her face was covered in heavy makeup for her new role in an anti-bullying movie, ‘Worthless’.