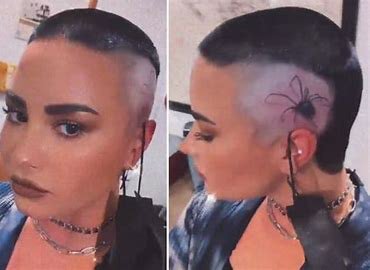 I think They’ll do anything for attention. I don’t think they even know who they are anymore. For the longest time Demi was a woman and then when it became trendy to be no binary, suddenly they “came out”. I think Demi is queer baiting and that tattoo is just part of their new fake identity. A designer handbag is a trend and it’s a lot cuter than a spider tattoo on your head and pretending to be someone else.

The New Year means a new beginning and a spot of new ink for Demi Lovato. The 29-year-old pop star debuted with a new tattoo on Saturday, January 8, shortly after it was revealed that she had completed more treatments amid a long journey to sobriety and more than a week after celebrating her first year. New since it was declared non-binary last summer.

Demi, who had sported a new shaved look just after Christmas, posted on her Instagram story a photo of a black spider tattoo decorating the side of her head, on a section of freshly shaved skin.

Demi’s ink is the brainchild of Dr. Woo. The popular Los Angeles-based celebrity favorite artist has given the singer multiple tattoos in the past, including a tattoo on her neck with the word “survivor.” He tattooed Lovato in December 2019.

What do you think of her head tattoo? Send in your comments.