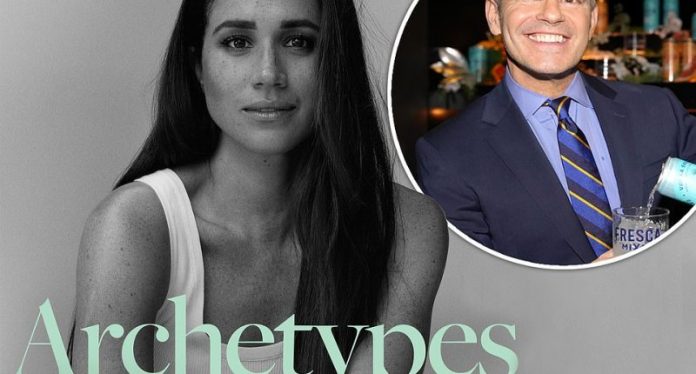 Meghan Markle revealed she was a ‘huge fan’ of the Real Housewives TV series and was star-struck when she twice spoke to its creator Andy Cohen, who has no memory of meeting her. The embarrassing moment emerged as the former Suits star released the final episode of her Archetypes podcast featuring male guests for the first time after Prince Harry ‘suggested’ it.

The Duchess of Sussex, 41, who lives in Montecito, California, talked of her love for the Real Housewives franchise with its executive producer Andy Cohen but said she stopped watching when her own private life became more ‘dramatic’ – a likely nod to meeting Harry and joining the Royal Family.

And in an awkward start to the episode, called ‘Man-ifesting a Cultural Shift,’ Meghan says she has met Mr. Cohen on several occasions when she was in Suits. But it became clear he had forgotten when he said ‘nice to meet you’ at the beginning of the interview.

She said: ‘I met you before. You’ll never remember it’. He replied: ‘You’re joking,’ to which Meghan laughed and said: ‘Would I joke about that? This is great.’ She went on: ‘I met you twice. The first one is when Suits wasn’t even on, yet. And then when we had maybe season two or three, we were in New York.’

Revealing that she wanted to be on his late-night TV show, Watch What Happens Live, she said: ‘I was so eager to be on your show because I was such a Housewives fan at the time and I just couldn’t get booked Andy.’ Mr Cohen squealed uncomfortably as he regaled the stories – and she said: ‘It’s not bad, it’s not bad. Don’t sweat.’

He then said: ‘I had that feeling when basically, we started to kind of forensically, figure out if it was you because we had a sense, we kind of put it together a little. We were like, I think she may be a Housewives fan but even worse.

‘I was like “Oh my God, if it turns out that Meghan Markle, actually expressed an interest to be on Watch What Happens Live? It is now the biggest blunder in the 13 years of the show.” ‘After she admitted being a long-time fan of the show, Andy, one of three male guests, told Meghan: ‘I guess the million-dollar question is, do you still watch the Housewives? This is what we’ve been dying to know.’  Pictured: The cast of season 10 of the Real Housewives of Orange County.

Meghan replied: ‘Well, I will tell you the truth. I stopped watching the Housewives when my life had its own level of drama. That I stopped…’ Andy finished her sentence for her, saying: ‘craving other people’s.’ Meghan agreed with his interpretation and said: ‘I get why it was such a huge part of pop culture and when it began because you began with Orange County and I’m from California, at least,’ she added. ‘It felt remotely like a world that I knew but still felt so foreign,’ she added.

Cohen went on to mention rumors that were swirling around a possible appearance from Meghan on the Beverly Hills series of the franchise after she and The Duke of Sussex stepped down as senior royals and moved to the US. She laughed them off, saying she wasn’t aware of any rumors and that she wouldn’t appear in any TV reality TV show.

At the start of the show, Meghan admitted that her British husband said she should speak to men on the show, currently 29 in the Spotify charts, to ‘shift the gender debate.’ The Duchess of Sussex spoke to the host of The Daily Show Trevor Noah movie director Judd Apatow and Mr Cohen for their take on ‘the labels and tropes that try to hold women back.’

Her Spotify podcast deal is said to be worth $18million and episode 12 of her show is finally completed two years after the contract was signed with the streaming giant. Meghan revealed that the first male guests on Archetypes came after Prince Harry – the only man to appear in an episode so far – suggested she should.

She said: ‘Now, if you’ve been listening to the past eleven episodes, you may have noticed that you haven’t heard many men’s voices, in fact, until now outside of a quick pop-in from my husband, in the first episode, this show has featured exclusively women’s voices.

It was important to us that women have a space to share their authentic and complicated complex and dynamic experiences to be heard. And to be understood. But through that process, it also occurred to me, and truth be told at the suggestion of my husband, that if we really want to shift how we think about gender and the limiting labels that we separate people into, then we have to broaden the conversation.

And we have to actively include men in that conversation and certainly in that effort. So today we are doing just that we’re opening it all up and breaking out of the box.’