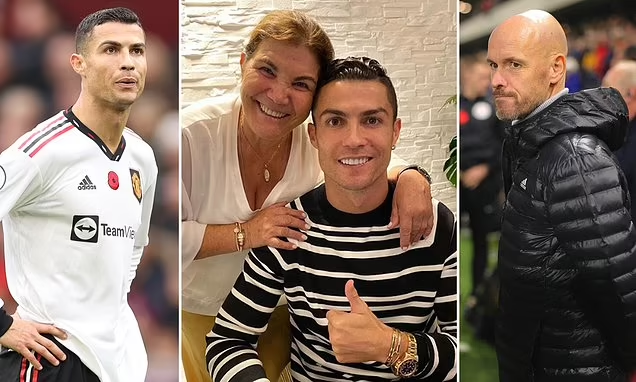 Cristiano Ronaldo’s mother, Dolores Aveiro has publicly shown her support for her son, by applauding an open letter written by a Portuguese journalist, calling Erik ten Hag a “miserable footnote in history” and telling him to “f*** off”.

Recall that Ronaldo had in an explosive interview with Piers Morgan days ago, said he doesn’t respect Ten Hag. He also criticized the owners of Manchester United, as well as Ralf Rangnick and former teammates Wayne Rooney, and Gary Neville.

Amid reports that Manchester United are preparing to sack Ronaldo for a breach of contract, Dolores has reacted to the interview for the first time.

She took to her Instastory to share an open letter from journalist Luis Osorio, which slammed Ten Hag. She also attached a clapping emoji.

“As far as the Dutchman who has managed you in these last few months goes, I just want to laugh. How can you compare what you are to a miserable footnote in football history!”

The journalist went on to describe Ronaldo as someone who “designed his life as he thought it should be, not as others thought was best for him.”

“Some drool for you to fail, others really want to be for the umpteenth time Cristiano Ronaldo. The kid who was not destined to be born, but your mother’s final instinct allowed him to see the world.

“The kid who suffered from his father’s alcoholism, but who made it a weapon to never give up. The kid who was born in a very poor house on the outskirts of Funchal, but who today gives his name to the airport where millionaires arrive every day who have no idea what poverty is.

“The kid who came to live in Lisbon alone at the age of 12, the one who cried because of loneliness and being mocked every time he opened his mouth but today speaks several languages. The kid who became the best in the world.”