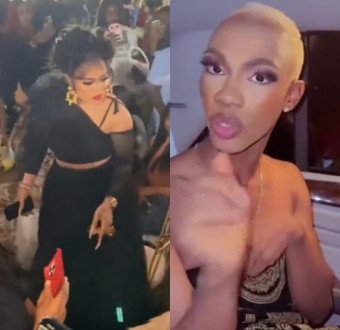 Nigerian crossdresser James Brown has taken to his Instagram page to rant and tackle his senior colleague Bobrisky for snubbing him at an event in Lagos.

In an event, later revealed to be a child’s birthday party, Bobrisky, Papaya Ex and James Brown were invited. Bobrisky initiated an altercation by aggressively throwing a bottle in the direction of Papaya and James Brown.

Later on, James Brown approached Bobrisky to greet him, but was snubbed. According to him, his intention was to bid farewell to the old queen (Bobrisky) as the reign of the new queen (James Brown) was here.

The action of Bobrisky, led James Brown to take to his social media handle to rant and diss Bobrisky for what he did and the action he carried out.

In his video, he said he did not know why Bobrisky acted the way he did because he(Bobrisky) congratulated him when he (James brown) his Range Rover.