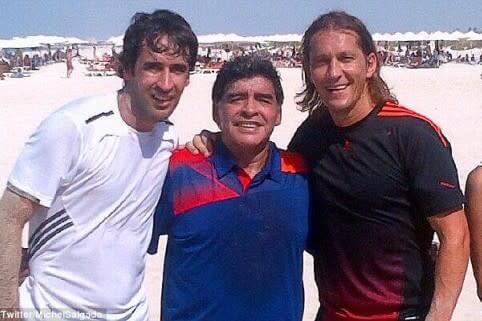 Messi put Argentina ahead in their World Cup opener from the penalty spot, only for the underdogs to score two goals in the opening eight minutes of the second half to stun the favourites nation.

The Paris Saint-Germain superstar is at his fifth and final World Cup which might be his last chance at winning the competition, while Maradona famously carried his Argentina side to glory in Mexico back in 1986.

As reported by AS Sport, Maradona Jr has claimed that his iconic father and Messi are not on the same level.

He said: ‘I am devastated by the defeat of Argentina. I find it hard to believe that all this really happened. Losing to Saudi Arabia is crazy,’ he told Radio Marte in Italy.

He added: ‘The comparison between Messi and my dad is made by those who don’t see and don’t understand football. We are talking about two different planets. But I don’t want to throw the cross at Lionel right away.’

Speaking about Argentina’s shocking defeat, he concluded: ‘Sometimes in football you lose even against much weaker opponents.

‘I don’t think Argentina was presumptuous today. Rather, he was afraid . Soccer is like that. If you don’t close the games, even the poorest teams will come after you.’

photo of the legend at the beach