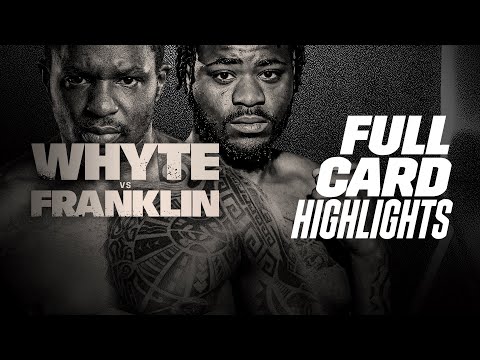 Dillian Whyte scraped a win to keep his hopes for an Anthony Joshua rematch alive.

On Saturday at Wembley Arena in London, British heavyweight Dillian Whyte defeated Jermaine Franklin by majority decision after tougher-than-expected 12-round battle. At the end, Whyte had scores of 116-112, 116-112, and 115-115, giving Whyte the victory.

Going into the match, Whyte was the man to beat despite his recent struggles.

The bout was a close, competitive, and scrappy one. Whyte (29-3, 19 KO) never once really “took over” the fight, which it seemed in the first half was the intent, to get Franklin (21-1, 14 KO) a bit weathered and then overpower him.

Whyte led from the first bell, but Franklin was ready to face-off against the Briton and focused on his opponent’s body to look for gaps.

In the second round, Whyte started to use his jab and launch some of his own hard-hitting body blows, but Franklin absorbed all of them.

Due to the fact that this was Franklin’s first 12-round battle, fatigue appeared to have already set in as his blows started to lose force in round four compared to the early exchanges.

In the sixth, Franklin gained momentum and launched his own combinations as Whyte grew too accustomed to the fight’s tempo.

Frank was smart enough to engage the bout according to his strength, but things wouldn’t come through for him.

In round eight, he managed to get through Whyte’s defense with a right uppercut, which frequently drove Whyte to the mat.

In less than a minute left, Whyte connected with a left hook that sent Franklin flying against the ropes. However, Whyte was unable to capitalize, and the fight was decided by the judges’ scores.

After the bout, Whyte had this to say:

“I expected a tough fight. An undefeated heavyweight is hard to beat. He’s got a lot of beans in his belly and he came in to give us a good fight.”

“I could have probably been a bit more active and landed a lot more big shots in the fight,” Whyte admitted, and said that working with new trainer Buddy McGirt brought new things to his approach.

Whyte did thank Franklin for a good fight.

As for a rematch with Anthony Joshua, Whyte said, “I’m ready for whatever, man. Right now I just want to relax.” Whyte and Joshua did shake hands after the fight, with AJ at ringside.

In Franklin’s full assessment of the bout, he said:

“I had a seven-week camp, I did what I could. I’m down for a rematch if they’d give it to me. But like I said, I felt like I won, I felt like I got robbed on the decision. I proved a lot of people wrong.”

Whyte’s rematch with Anthony Joshua could be in next summer since Eddie Hearn announced that AJ may return in March.