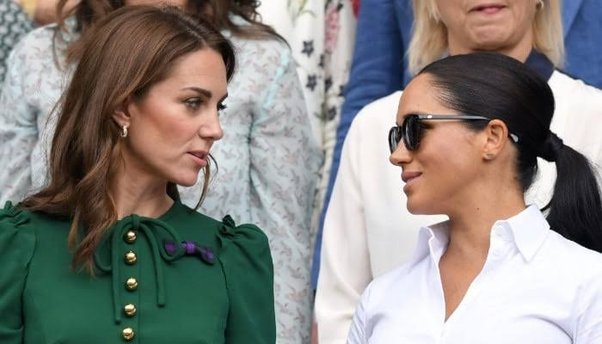 Kate will not make a surprise appearance at Meghan Markle’s archetypes podcast, a royal correspondent claimed, as the two women’s relations are still bruised.

Since the Duchess dropped bombshells in an interview with Oprah Winfrey, Meghan and Kate haven’t seen eye to eye.

Because of their differences, a Kate appearance on the podcast remains almost implausible, the Daily Express’ Royal correspondent said.

“I don’t get the impression that there is much of a relationship there between them at the moment. Maybe that will change but I think the signs are the relations are still pretty strained.”

However, he said Kate and other Royal Family members related to some of the grievances aired by Meghan Markle and Prince Harry when they still acted as working members of the Firm.

“I don’t think that it was a case that they were completely uncaring about their concerns. Not at all – far from it.

“It was just they didn’t agree with their approach, which was essentially to quit Britain, break the deal between the British people and members of the Royal Family in terms of what information shared about things like godchildren at a christening, and of course declare the war on the British media.”

It remains unclear whether the Princess of Wales will ever make an appearance on Meghan Markle’s podcast.

According to royal expert Neil Sean, the 41-year-old could soon be joined by Kate after reportedly asking her sister-in-law to appear on Archetypes during her recent visit to the UK.

Mr Sean said: “While [Meghan] was over here, staying in Windsor at their [Frogmore] cottage, she put out a request to the Princess of Wales, according to that good source, to appear on a forthcoming episode of Archetypes.

“Apparently she could have the whole episode to herself, how generous, and, as ever, we have to say allegedly.”