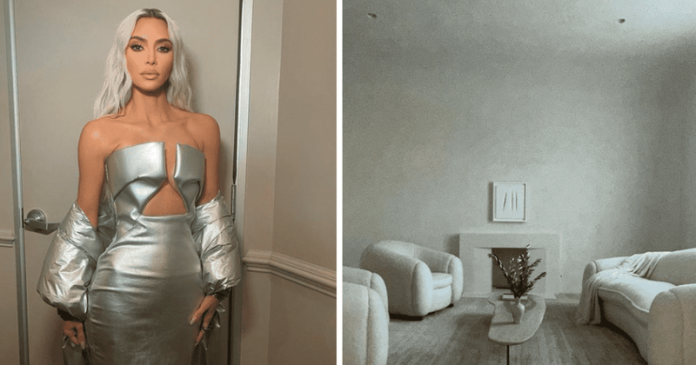 Several fans have called out Kim Kardashian after she posted series of photos about her house. They described her house as ”cold” and depressing.

Kim Kardashian, aged 42, posted a series of images of her home on Instagram with the caption ”Things at home that make me happy”. The shots included pictures of her bedroom, bathroom, living room and even backyard.

Although most people criticized the look of her house, with some saying it looked very basic and lacking colour, Kim has defended it countless times.

In an interview with Vogue in February 2022, she said, ”Everything in my house is really minimal. I find that there’s so much chaos out in the world that once I come home, I want it to be really quiet and I want everything to feel charming”.

The mother of four, shares custody of her kids North, Saint, Chicago and Psalm with her ex husband Kanye West. When talking about keeping the house clean with little kids around, she jokingly said ”Oh my God. I run around the house with towels”.

You do have to just take a deep breath and say, Ok it’s going to happen. We decided to have lighter colors. Our last house that we just moved out of was all grays, which was a good test because we knew we were going to move into a lighter house” she continued.

Fans and several members of the public however, do not agree with the aesthetics of her house, with lots of them openly criticizing the fact that it lacked any color.

One fan even went as far as calling it ”basic AF”, and another saying ”that decor would make me depressed”. Another user said ”I would feel like I’m sleeping in a morgue in that bedroom”, and another user described the entire setting as ”haunting”.

Despite what fans have to say about Kim’s home, it is very obvious that the Kardashians spare no expense decorating or furnishing their homes.