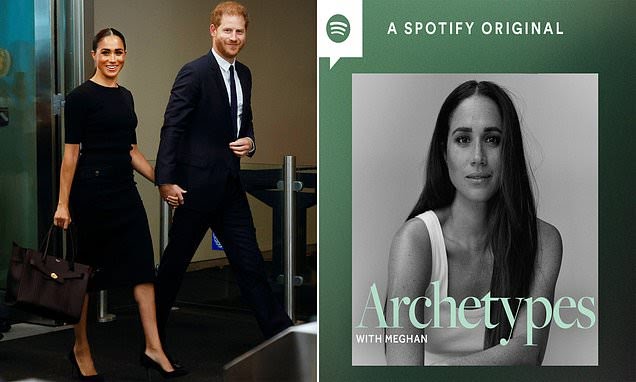 Meghan Markle Shares How Prince Harry Inspired the Final Episode of Her Archetypes Podcast -inviting three men onto her show for the first time to discuss some of the stereotypes and gender roles that hold women back.

Meghan Markle gained is not only known for her royal status, but she’s also made a name for herself as a female advocate.

The Duchess of Sussex decided to dedicate her entire podcast, Archetypes, towards exploring and dismantling the labels that define women in the society.

For the final episode of the season, which was released on November 29, 2022, the duchess opened up the conversation to the men.

Andy Cohen, Trevor Noah, and Judd Apatow all joined her to talk about female stereotypes, and she has revealed the idea to team up with three men for the episode came from Prince Harry.

In her statement, she said, “Now, if you’ve been listening to the past 11 episodes, you may have noticed that you haven’t heard many men’s voices,” she says.

“In fact, until now, outside a pop-in from my husband in the first episode, this show has featured exclusively women’s voices, and that’s by design.

“It was important to us that women have a space to share their authentic and complicated, complex and dynamic experiences—to be heard and to be understood.

“But through that process, it also occurred to me—and truth be told, at the suggestion of my husband—that if we really want to shift how we think about gender and the limiting labels that we separate people into, then we have to broaden the conversation, and we have to actively include men in that conversation and certainly in that effort.”

Markle explains that she selected male guests with successful careers but who are also activists in the media or their family lives.

Markle wraps up the episode by reflecting on her podcast and describing how the experience has been cathartic for herself and other female listeners. In her conclusion:

“I don’t know what I’d been expecting, but what’s come out of it for me has been illuminating and also ironic because while this format is only audio and each week I use my voice, you can hear my thoughts without any visual,” Meghan reveals.

“I feel seen. I had never considered that in using my voice that I would feel seen, but I do. And so much of the feedback throughout the season from women is that they feel seen as well. As we heard today, that men see our experience differently now, too. They see us. They see us more clearly.”