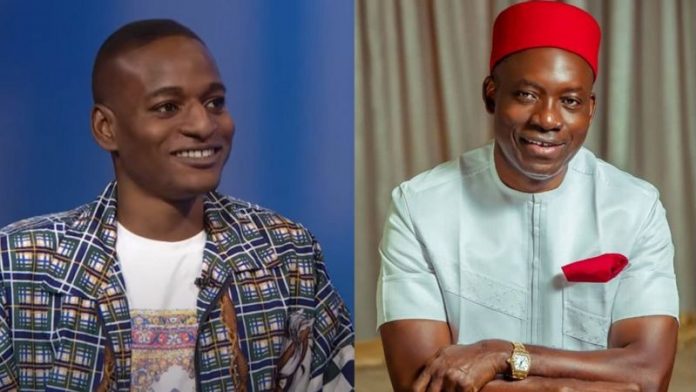 As Governor Charles Soludo’s attack on Peter Obi, the presidential candidate of the Labour Party, LP, continues to reverberate, Ozonna Soludo has differed with his father’s stance, saying Obi is the best candidate.

Ozonna, Governor Soludo’s son, said he does not want to be dragged into politics but prefers Obi to other candidates.

The 28-year-old UK-based artiste disclosed this in a comment on Facebook in response to a social media post criticizing his father for opposing Obi’s presidential ambition.

Recall that Governor Soludo had attacked Obi in a lengthy essay on Monday, claiming that he would not win the presidential election.

While also throwing shade at Obi’s claim of making huge savings for Anambra State during his tenure, Soludo also said that governments exist to save lives and not to save money.

Ozonna said Peter Obi is the best candidate despite his father’s stance.

He wrote, “I am not an extension of anybody. I have my own opinions and have always said I think Peter is the best candidate. All this has nothing to do with me”.