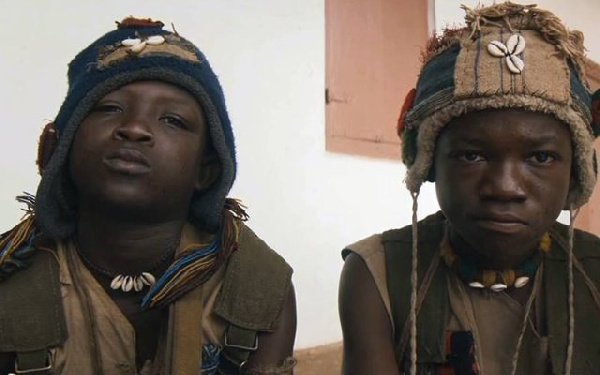 Talented Ghanaian actor born Emmanuel Nii Adom Quaye has once again come to the internet to beg for help and solicit funds for the second time.

In a video that was trending in 2019, the young actor was spotted on the streets of Kaneshie by renowned Gospel musician, Minister Edward.

Strika disclosed that life wasn’t easy for him before and after he got a role in the movie, ‘Beast of No Nation.’

According to close sources, he sold yam at Agbogbloshie Market and stayed with his grandma at North Kaneshie.

When he was asked by the musician why he still hasn’t given up on smoking, he revealed that due to his pain and suffering, he is finding it hard to give up smoking.

Quaye who played the role of Strika alongside Abraham Attah, known as Agu in the movie, has been spotted (for the second time) selling coconut on the streets of Accra.

In a video sighted on the Instagram page @elikem_the_gossip, Strika is seen pushing a wheelbarrow full of fresh coconut.

In an interview Strika granted, he revealed that $30,000 was paid to his handlers at the time of the movie, but he did not receive a penny.

The actor emotionally revealed that Ghanaians will weep if they find out where he sleeps.

Strika also disclosed that aside from his difficulty finding accommodation, he works as a carpenter’s apprentice and has to rely on his master to feed him.

He ended his plea by revealing that he will be very happy if movie directors cast him on even skits or short comedy series.