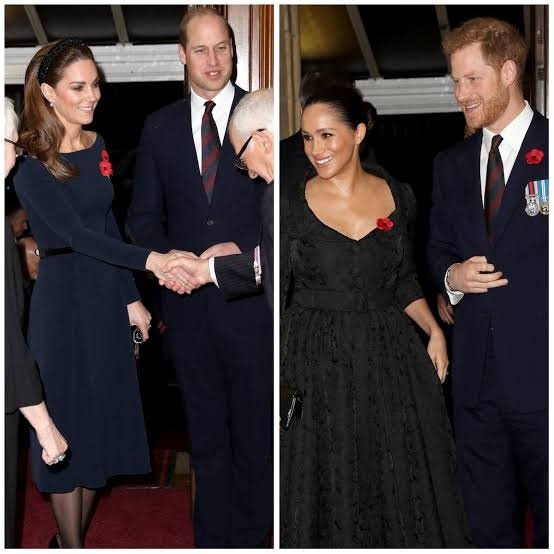 After the royal family’s 2022 Remembrance Day events, revisit one of the same outings from 2019. Prince Harry and Meghan Markle were there alongside Prince William and Kate Middleton. Ahead, learn what a body language expert had to say about the Duke and Duchess of Sussex’s “awkward” displays compared to the “relaxed” Prince and Princess of Wales.

Before the body language analysis, some context on what was happening at the time. When Harry, Meghan, William, and Kate stepped out on Nov. 9, 2019, a certain documentary had aired only weeks earlier.

On Oct. 20 and Oct. 23, Harry & Meghan: An African Journey aired in the U.K. and U.S. respectively. In it, Harry publicly acknowledged for the first time he and William were on “different paths.” Meanwhile, Meghan admitted negative treatment from the press had taken a toll on her.

So, understandably, when the couples arrived at Albert Hall in London, England, for the Royal British Legion Festival of Remembrance, all eyes were on them. After all, it marked their first public event together since the documentary aired.

At the time of the 2019 Remembrance Day festival, body language expert Blanca Cobb examined the couples’ gestures and movements. Based on their interactions and facial expressions, the Prince and Princess of Wales looked at ease.

“They seemed much more relaxed and happier than Meghan and Harry,” the expert said (via Cosmopolitan). Examining Kate’s smile, Cobb noted how the now-40-year-old had a “much bigger smile” than her sister-in-law. “You tend to emote more when you’re happy and relaxed,” she explained.

Looking at a photo from the 2019 Festival of Remembrance, Cobb shared that William and Kate demonstrating their “bond” with tactile displays suggested how relaxed they were. It’s “a great sign and shows the level of comfort between them,” she said. Furthermore, it suggested they were also “comfortable in the situation.”