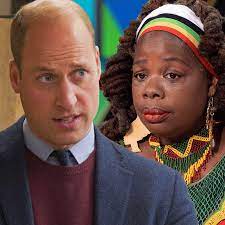 Prince William is speaking out against racism that’s been alleged against his godmother — who’s also a high-ranking Buckingham Palace aide.

Reps for the Prince of Wales says he is “really disappointed” by the account shared by Ngozi Fulani about Lady Susan Hussey, adding … “Racism has no place in our society, these comments were unacceptable and it’s right that the individual concerned has stepped down.”

Hussey — a Royal courtier, who works for Queen Consort Camilla and who served Queen Elizabeth II for years prior to her death — resigned from her post after Fulani publicly detailed an uncomfortable interrogation she says Lady Hussey put her through Tuesday at Buckingham Palace.

Fulani, who heads up a nonprofit in the UK for DV survivors of color, says she was in attendance for an event Camilla hosted to raise awareness for violence against women … and that’s when Hussey approached her.

Fulani claims Hussey moved her hair out of the way to view her name tag, and then went on to ask where she was from — which NF says turned into a back-and-forth about where her ancestors were from.

Fulani, at first, identified the org she was with — Sistah Space — but she says Hussey wanted to know what part of the world she was from. Fulani says she told Hussey she was British, but Hussey apparently wouldn’t accept that … pressing for her regional heritage.

When Fulani explained that she was of African heritage, Caribbean descent and British nationality … she says Hussey butted in and flippantly said, “Oh, so you’re from …” Fulani says the interaction left her disillusioned the rest of the time she was there.

When she posted this on Twitter, it went viral … and Buckingham Palace issued an apology on behalf of Hussey, adding … “All members of the household are being reminded of the diversity and inclusivity policies which they are required to uphold at all times.”

BP also said they’d reached out to Fulani personally and extended an invite if she wanted to discuss things further. Despite this, the backlash mounting has been swift and fierce.