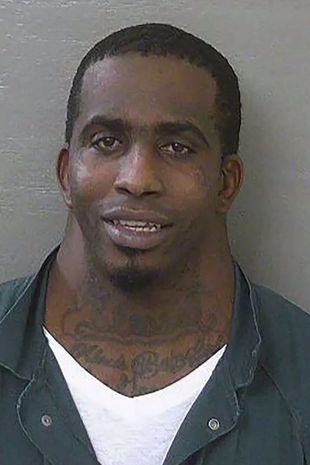 A man whose wide-necked mugshot went viral and attracted millions of fans has been arrested again.

Charles McDowell, 35, first rose to fame when he was initially booked into Escambia County Jail in Florida for stalking and withholding child support payments in 2018.

In August this year police issued a warrant for his arrest after he showed up at a woman’s house and sent threatening messages to her.

He was later arrested for a series of other charges including drug offenses and fleeing from police officers.

However, social media users only remember the suspect for one reason – and that’s his wide-necked mugshot which went viral.

It turned him into an internet sensation and he now has over a million followers on Instagram.

Charles used his newfound fame to join a rap group consisting of other online celebrities and even recorded a video with “Daddy Long Neck,” a younger man who also has a very long neck.

And in 2020 he released “Neckst Big Thing”, which has been viewed over 5 million times on YouTube.

Police confirmed the suspect is currently being held without a bond.

Mugshots often go viral on Facebook, including the time social media users were left swooning over American Jeremy Meeks in 2014 after he was dubbed “the world’s hottest felon.”

Following his arrest, he admitted to the theft and possessing a gun which saw him jailed for 27 months in February 2015.

However, following his release in 2016, he landed a modeling contract and has appeared in adverts with some of the world’s biggest celebrities.