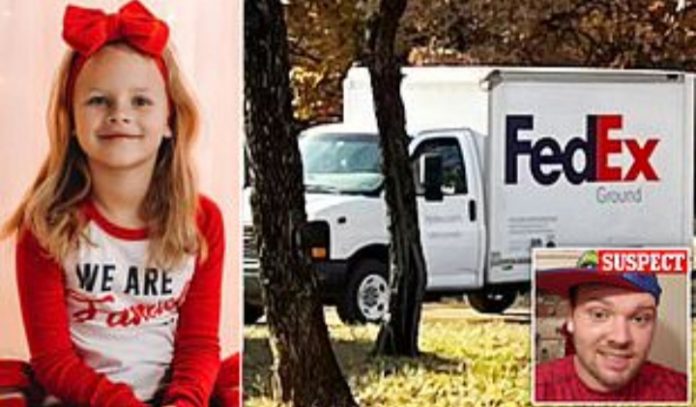 7-year-old Texas girl is found dead two days after she was abducted by FedEx driver dropping package off at her home, who murdered her within an hour of kidnapping her.

“The body of 7-year-old Athena Strand has been found,” Wise County Sheriff Lane Akin said at a press conference on Friday night, with a suspect in custody.

The suspect, Tanner Lynn Horner, 31, confessed to police to abducting and killing Athena on Wednesday afternoon.

Horner was working as a contract FedEx truck driver and had been delivering a package to Athena’s family home at the time the abduction allegedly occurred.

Police revealed how digital evidence together with interviews suggest the little girl did not live more than an hour after being snatched.

Horner has been charged with capital murder and aggravated kidnapping and is being held on $1.5million bond.

“We’re just sad it didn’t end the way that we hoped that it would end,” Sheriff Lane Akin said during a Friday night press conference.

Horner is the only suspect authorities believe is responsible in the case, Akin said. “He did not have any relation or connection to the family.”

According to the Wise County Sheriff’s Office, the child was dropped off at home from school at her home in Paradise at 4.30pm on Wednesday.

At some point afterwards, the youngster was outside her home after an argument with her step-mother. At the same time, Horner was delivering a FedEx package to her house.

When Athena didn’t come back inside and could not be found in her bedroom, her step-mom reported her missing to police around 6.40pm.

Sheriff revealed girl’s body was found 10 miles from where she was kidnapped.

Police only able to connect the dots between Athena’s disappearance and Horner’s delivery route following a tip off, with the FBI, Texas Rangers and Wise County Sheriff’s Offices working in tandem to bring the case to a speedy yet tragic end, although two false leads sent police looking in the wrong places for the girl.